The present invention relates to a compression and pushing motor characterized in that it is composed of a housing, said housing accommodates a rotor rotating in its internal space supported by a pair of gears whose passage coincides with the inner surface of the rotor; A rotor (or core) that internally has flow ducts presented one in reverse of another, balanced these, begin at the point where they end; Has several cavity points for reaction turbines, as well as two combustion chambers isolated by means of a system of nozzles and presented in the manner of poles, that is on opposite sides of one another, but their flow with the same circular direction of the rotor when It rotates; The rotor also has several fluid conduits radially presented; A hollow power transmission rod arranged and traversing in the center of the rotor, which in its interior flows the lubricant and fuel with movement of the ends towards the center, at this point by means of the centrifugal force of the rotor reaches the required parts; In the bar is arranged an air intake fan which by rotating the rotor suction air and introduces it to the internal ducts of the rotor with an initial compression, next to this fan is a current collector that generates the necessary electricity and Together with a coil, activates the current necessary for combustion; A center of the nucleus in which the formation of the internal ducts of the rotor begins and ends (in and out); Said center of the core has arranged a pair of semi-cylindrical cavities housing two pairs of turbochargers said core of the core is diagonally traversed by fluid conduits exiting from the bar to the combustion bed and lubrication points and by the centrifugal force of the rotation Of the rotor sends the fluids to the required points due to their radial direction; Exhaust blades are the point of exit of the exhaust gases that leave the internal ducts of the rotor and contrareaccionan with the fixed blade in the last point of use of propulsion of the motor; Two combustion chambers contained in the rotor's strong ducts when the parts forming it are joined, said chambers have their flame in front of the thrust blade, which is connected by a common shaft to a gear located on the outside of the rotor and Coincides with the internal gear of the housing; A starter motor which by means of a gear engages the starter gear attached to the bar.

-This innovative concept consists of hull and core where are held all 8 Steps of the work-flow which make the concept functional. The core has several gears and turbines which are responsible for these 8 steps (5 of them are dedicated to the turbo stages). The first step is fuel compression, followed by 2 cold turbo levels. The fourth step is where the fuel starts burning – combustion stage, which creates thrust for the next, 5th step – thrust step, which provides power to the planetary gears and turbines and moves the system. This step is followed by two hot turbo steps and the circle is enclosed by the final 8th step – bigger turbine. All this motion in a retrodynamic circumstance effect, wich is plus higher RPM speed by self motion. The Reaction at front of the action.

-With Retrodynamic Dextrogiro vs Levogiro Phenomenon Effect. / Rotor-RPM VS InFlow / front to front; "Collision-Interaction Type" - inflow vs blades-gear-move. Technical unique dynamic innovative motion mode. [Retrodynamic Reaction = When the inflow have more velocity the rotor have more RPM Acceleration, with high (XY Position) Momentum] Which the internal flow (and rotor) duplicate its speed, when activated being in a rotor (and inflow) with [inverse] opposite Turns. The Reaction at front of the action. A very strong Novel torque power concept.

·2-IMPLOTURBOCOMPRESSOR; Implo-Ducted, One Moving Part System Excellence Design - The InFlow Interaction comes from Macro-Flow and goes to Micro-Flow by Implossion - Only One Compression Step; Inflow, Compression and outflow at one simple circular dynamic motion Concept.

*2-IMPLOTURBOCOMPRESSOR BEHANCE Images Gallery Portafolio:
https://www.behance.net/gallery/21691891/Imploturbocompressor
*·“Excellence in Design" because is only one moving part. Only one unique compression step. Inflow and out flow at the same one system, This invention by its nature a logic and simple conception in the dynamics flow mechanics area. The invention is a wing made of one piece in a rotating motion, contained in a pair cavity system connected by implocavity, and interacting dynamically with a flow, that passes internally "Imploded" through its simple mechanism. This flow can be gas (air) or liquid (water). And have two different applications, in two different form-function; this one can be received (using the dynamic flow passage, as a receiver). Or it can be generated (with a power plant, generating a propulsion).

An example cut be, as a Bike needs a chain to work from motor to wheel. And for the Imploturbocompressor application, cut be as; in a circumstance at the engine, as an A-activate flow, and with a a tube flow conduit going to the wheel as a B-receiving-flow the work use.

To see a Imploturbocompressor animation, is posible on a simple way, just to check the Hurricane Satellite view, and is the same implo inflow way nature.

And when the flow that is received and that is intended to be used at best, must no necessarily by a exhausting or rejection gas, but must be a dynamic passing gas or liquid flow with the only intention to count it or to measure it. This could be possible at the passing and interacting period when it passes inside its simple mechanism. This can be in any point of the work flow trajectory.
In case the flow that is received is a water falling by gravity, the Imploturbocompressor can profit an be obtained by generating? electricity such as obtained by the pelton well, like I say before. The "Imploturbocompressor", is a good option to pump water, or a gas flow, and all kinds of pipes lines dynamic moves.

Or only receive the air-liquid flow, in order to measure its passage with a counter placed on the bar, because when this flow passes through the simple mechanism of a rotating wing made of only one piece it interacts within the implocavities system. And this flow can be air wind, with the difference of can have an horizontal work position, and that particle technical circumstances make an easy way for urban building work new use application, and have wind flow from all the sides 180 grades view. The aforementioned information about this invention refers to technical applications, such as a dynamic flow receiver. (whether being gas or liquid).

With the appropriate power plant and the appropriate dimensioning and number of RPM this invention is also feasible to generate an atmospheric air propulsion and the auto-propulsion of an aircraft. Being an effective and very simple system that implodes and compresses the atmospheric air permits the creation of a new concept of propulsion for aircrafts, due to its simple mechanism and innovative nature. At the place of the aircraft were the system appears and the manner how the propulsion direction can be oriented with a vectorial flow (no lobster tail) with I call "yo-yo system" (middle cut (at the shell) to move, one side loose), guided and balanced is feasible to create a new concept of TOVL-vertical take-off landing, Because the exhaust propulsion can going out radial in all the 360 vectorial positions, going out direct all the time in all the vectors direction. With his rotor cover for an better furtive fly, like going down of a bridge for example. Likewise, with the due form and dimensioning, and considering the liquid density and the due revolutions for this element there could be generated a propulsion (water) in order to move an aquatic ship, whether on surface or under water. Also can be a good option to pump liquid combustion for a rocket propulsion.

Making a metaphoric comparison with the intention to expose it more clearly for a better comprehension of this innovative technical detail, it would be similar to the trajectory and motion of a dynamic flow compared with a rope (extended) that passes through the system would have now a knot (without obstructing the flow), so the complete way of the flow at the imploturbocompresor system have three direct ways and between make two different turns; direct way (entrance) - turn - direct way (implocavity) - turn - direct way (exit), all this in a 1 simple circular move system concept.

Its prudent to mention that the curves and the inclinations of the blades of a rotating wing made of this invention, is conferred by its shape and function a structural rigidity allowing it to conduct and alter appropriately the dynamic flow passing through its system. 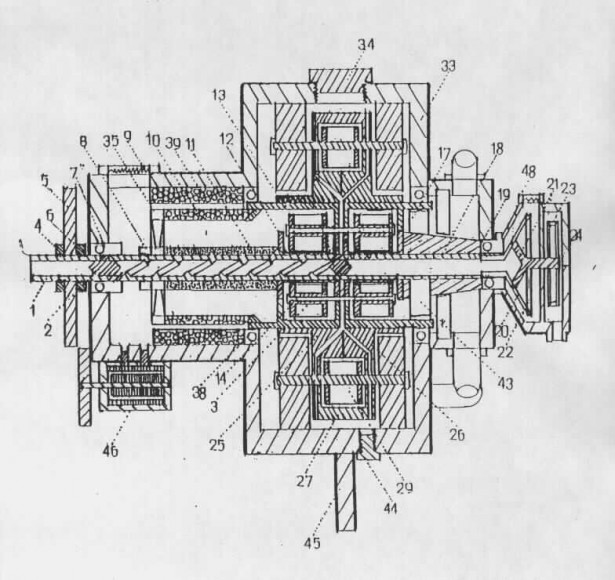 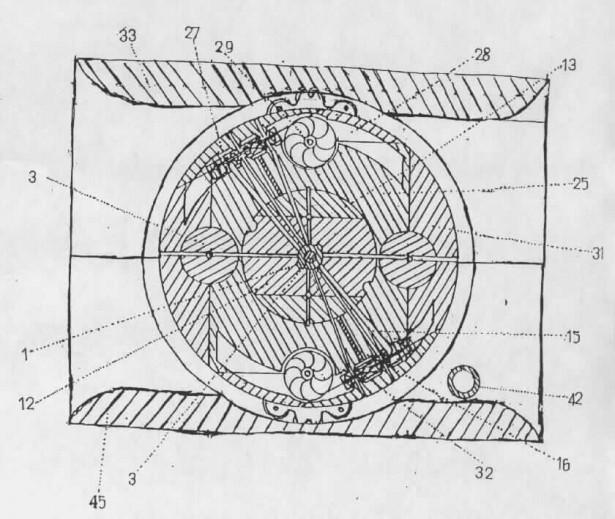 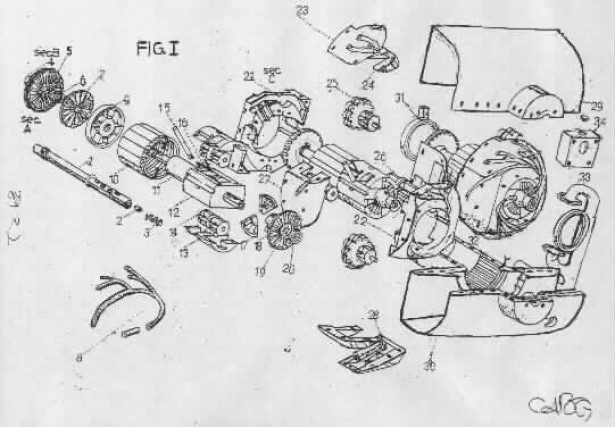 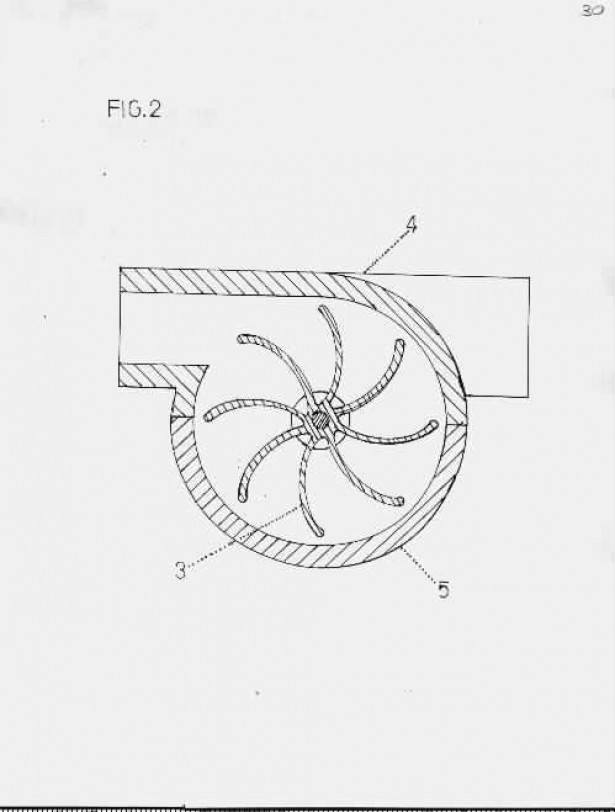 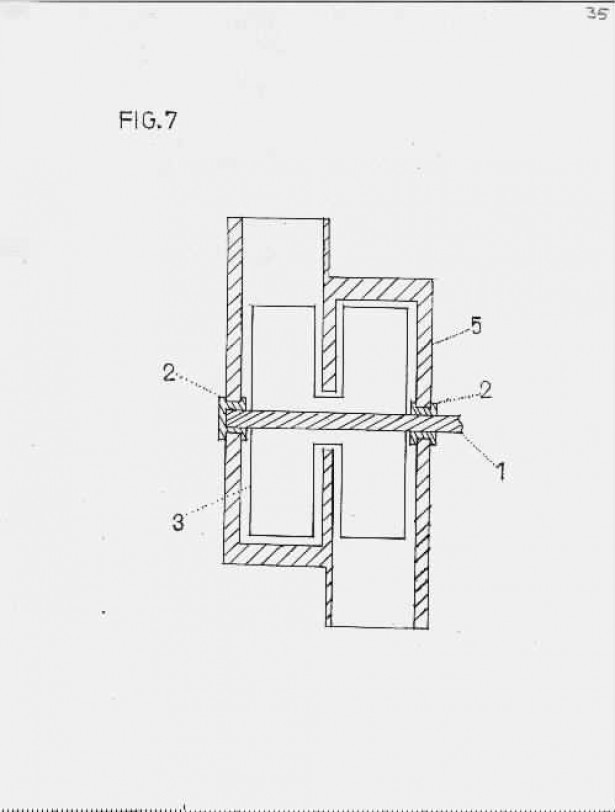 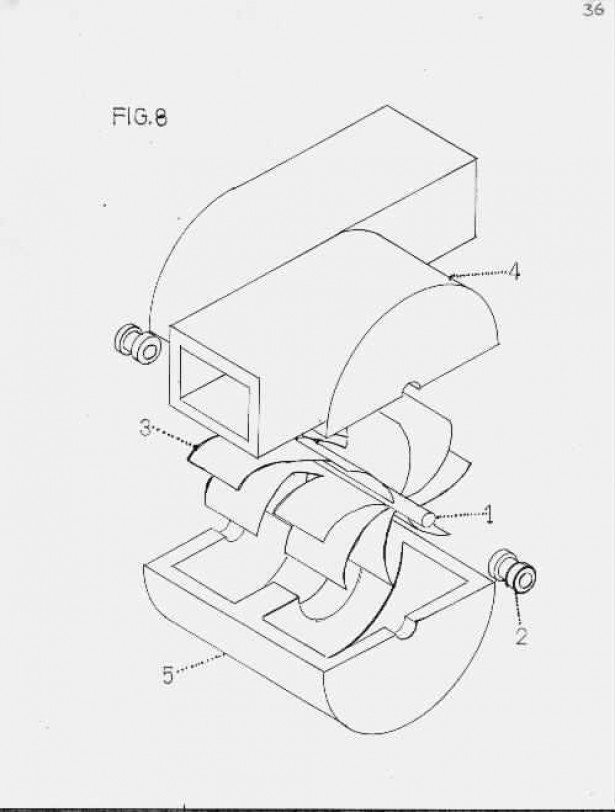