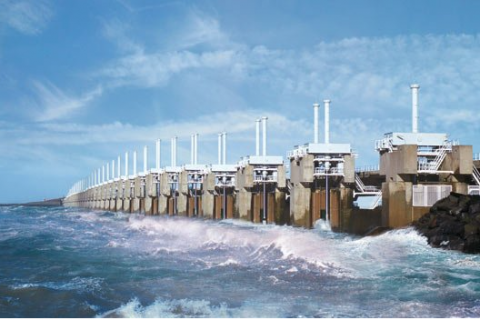 The buzzword "resilience" is everywhere these days. The 2019 USNC Pro delegation will not only take a look at Dutch innovation in the interface of nature and the built environment, but also how the built environment can be used, especially in the water space, to facilitate sustainability as cities and their environs increase in size and are expected to be accomodating to quality of life issues. A registration fee of $1950 covers most meals, in-country transportation, venue and admin costs. Airfare to and from the Netherlands and hotel are not included. A detailed agenda will be posted shortly.

What USNC Pro Alumni have said:
"As a coastal ecologist and the director of a non-profit policy research organization that conducts considerable research in protecting and restoring the U.S. Gulf coast and waterways around the world, I attended USNC Pro with an expectation that I would struggle to understand an engineering-heavy curriculum. To the contrary, the engineering was well explained and fascinating, but what I didn’t expect was the immense value of the entire program. Learning the Dutch perspective and emphasis on flood protection, green infrastructure, and novel design was incredibly valuable to my understanding of what is possible elsewhere. The priorities explained about how their novel, impressive efforts – for a small fraction of GDP – meet the top needs of their economy, culture and society have already informed our research elsewhere. Just as importantly, the networking opportunity has endured in the intervening years: I met new colleagues at USNC Pro that I continue to consult and seek new opportunities and insights with them..." Gary Cecchine, Director, Rand Institute for the Gulf States

"I have been part of the (USNC) United States-Netherlands Connection Professional delegation for three consecutive years. Every year[,] the trip has been a remarkable high-level professional and academic experience. The program fosters a unique and trendy educational environment in extramural settings where intellectual discourse flows unconcealed among established individuals in the public, private, academic and nonprofit sectors involved in coastal management. Every project visited or revisited, brings new depths to the understanding of how the interface between water, people, and the coastal land are managed in both countries; beyond cultural differences -as a passion and a necessity.[...]Every trip has served to enlarge my professional and academic network with outstanding advanced practitioners. People that with different but interrelated expertise in policy, administration, architecture, engineering, environmental planning, waterfront development, u others [sic] become willing to extend and share their resources and knowledge for a larger cause." Claudia Edith Avendano, Doctor of Policy Planning and Development, University of Southern California

IoT has a fluid state now; as we live and interact in an increasingly connected reality. We also see this evolving into new extremes, such as the discussions about Web3, the metaverse, and digital twins. At ThingsCon we feel the need to extend this discourse into understanding more about what is the real//real and what is virtual//real. 9 & 10 June the ThingsCon will meet again in person after two online editions in Rotterdam to exchange the latest insights and mark this new reality.