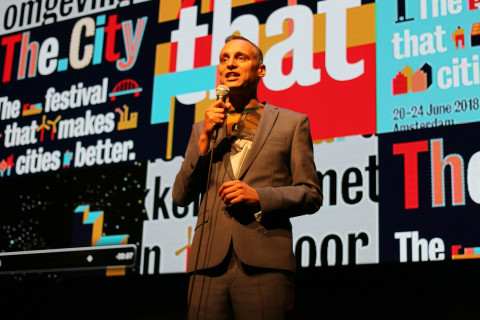 During the city festival WeMakeThe.City I visited the conference Next Generation Cities.

The conference was about the constructive and destructive forces of technology, with speakers such as Richard Stallman and many more international guests.

Next generations Cities: ‘Who owns the city?’

On Thursday the 21st of June, the exciting conference Next Generation Cities took place. During the conference the positive and negative effects of technology were debated – both during an inspiring plenary programme with key note speakers, and in break-out sessions that ignited into animated conversations.

In particular, different perspectives were discussed regarding the transformation towards an inclusive digital city. The guiding questions informing which road to take were: ‘Who owns technology?’ and ‘Who owns the city?’. The review focusses on sharing some of the highlights of what the acclaimed speakers and panelists brought to the fore during the plenary part of the conference.

Here you can read the full review I wrote:
<https://wemakethe.city/nl/highlights-next-generations-cities-who-owns-the-city>