The state of the city of Amsterdam - A short summary 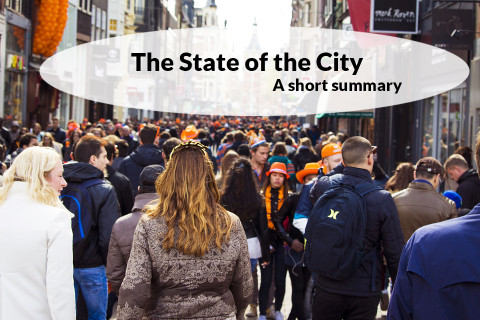 Yesterday (25th of October), ‘The State of the City’ (Staat van de Stad) took place in the Stadsschouwburg Amsterdam, organised by Pakhuis De Zwijger. During this evening, several experts and lecturers shared their vision on the current state of Amsterdam. How does Amsterdam develop? Is Amsterdam really becoming busier? Which challenges do we face? And how can we deal with these challenges? A short summary.

Collaborate with other cities

First of all, the mayor of Amsterdam Eberhard van der Laan explained that we all perceive that the city becomes busier. ‘You can see it with your eyes. And so do the facts. Annually, 10.000 people want to move to Amsterdam and there is a growth of companies (120 per year) that want to settle in Amsterdam. In the past five years, 8000 new hotels are created in Amsterdam. So yes, it becomes busier in the city. But this is caused by the success of Amsterdam. However, we should really take action to solve the related problems. And it is urgent! For instance: what are we going to do when the growing middle classes of China and India (3.000.000 people) also wants to visit Amsterdam in the coming decades?! Since Amsterdam is not the only city who faces this problem, we should work together with for instance Berlin and Paris. And we should also look to other cities in the Netherlands. Why not encourage tourists to stay in Rotterdam in a hotel and visit the Mauritshuis in The Hague instead of the Rijksmuseum? But, one thing is very important to keep in mind by looking to these solutions: Amsterdam must stay/be the city of the citizens of Amsterdam’’!

Migration is essential for a city

Philippe Legrain from the UK and political economist, touched upon migration to Amsterdam. ‘’Amsterdam will be one of the centres of the new global economy. This attracts people from all over the world to live and work in Amsterdam. Instead of seeing these migrants as the cause of problems like rising house prices, you can also look to their added value. They bring skilled labour and they are doing jobs which Dutch people do not want to do (anymore). Migration is essential for a city. For every job a migrant has, he/she creates another! Learn to live together in diversity’!

Rens van Tilburg explained the attractiveness and economic trends of Amsterdam. Especially the physical and digital connectivity of Amsterdam are important reasons why companies and people want to come to Amsterdam. However, the view on the economy is changing. A growing part of the citizens perceives that the economy is growing, but they do not have the feeling they take advantage out of it. The pie is growing, but people do not get a bigger part. And this leads to a decline of welfare and happiness. People do not accept the trend of a higher range between rich and poor people, also in Amsterdam. How can we solve this? Keep on investing in all classes of society! And: Keep on experimenting. Trial and error. The 21st century will be the century of the city!

Some other interesting quotes

> ‘Amsterdam is a privileged city, but this also means you have responsibilities’ – Domenica Ghidei Biidu
>
> ‘In Amsterdam, there are less unemployed lower educated people than unemployed higher educated people’ – Paul de Beer
>
> ‘Social Capital is one of the most important pillars of the economy’ – Rens van Tilburg
>
> ‘The population density of Amsterdam is only a quarter of Paris, and a third of Barcelona. Is it really that busy?’ – Philippe Legrain
>
> ‘Social housing is essential for a city to ensure diversity’ – Philippe Legrain
>
> ‘We should avoid that all local supermarkets in the neighborhoods are replaced by souvenir shops and waffle or cheese shops’ – Mayor Eberhard van der Laan
>
> ‘Mercy, one of the historical pillars of the city of Amsterdam, should always be kept in mind. Then, Amsterdam will become a Shining City on a Hill, but then in the Polder’ – Rens van Tilburg
>
> 'The city of Amsterdam should be inclusive'! - Gloria Dekker

There were much more interesting quotes and speeches, this is just a selection.