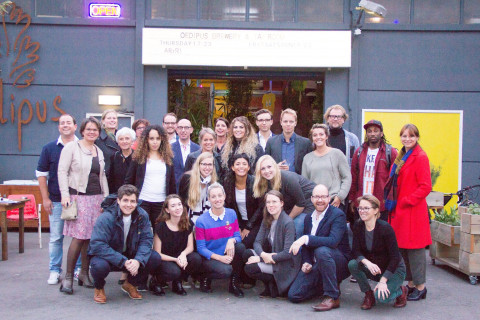 Amsterdam wants to be the circular capital of the world. And we’re already halfway to make this vision come true. Companies, govermental organisations, universities & scientists, they all come to Amsterdam to participate in the growing amsterdam circular movement.

The Amsterdam Circular Challenge gives participants the opportunity to create their own circular economy startup in this vibrant city. During a short, but intensive course of six weeks they work on resolving one of our challenges, which are presented by different Amsterdam based companies such as Waternet, AEB, Eigen Haard and City of Amsterdam. After those six weeks we’ll guide the best ideas into becoming reality.

Amsterdam wants to be the circular capital of the world. And we’re already halfway to make this vision come true. Companies, govermental organisations, universities & scientists, they all come to Amsterdam to participate in the growing amsterdam circular movement.

It's essential that we keep involving new, bright people in the Circular Economy. In the long run The aim of the ACC on the long rum to spread out the idea of the circular economy throughout all of the city trough its participants. In the short run it brings new ideas, new paradigms and above new solutions and enterprises towards our Circular City.

The Amsterdam Circular Challenge 2016 is an initiative of Rik Winsemius en Pieter De Stefano, specialised in mobilising van new crowds for societal challenges. They create concepts that link public and content together and by this lead to more awareness, tangible and concrete results and a lasting commitment from society. The Amsterdam Circular 2016 would not have been possible without the participation of Nederland Circulair, ING Nederland, City of Amsterdam, woningcorporatie Eigen Haard, AEB Amsterdam, Waternet and HvA.

The next step is to organize an even better version of the challenge in 2017. Next tot that we want to make sure that the ideas of 2016 get implemented. Last but not least we're also looking on how to spread the concept to other places with local partners and are talking with parties in Rotterdam, Brabant and Utrecht.

It's possible to have real solutions presented within a period of 6 weeks. If you put a group of ambitious and enthousiastic high potentials together for six weeks, you will get at great new concepts that surprise and motivate big companies to take their commitment to the circular economy to a next leve.

Next to that we also bind the new generation of our society to the quest for a circular economy that can replace our current consumer economy.