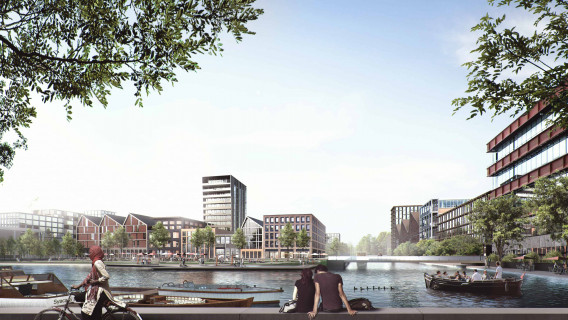 On Thursday, March 17 Grisha Zotov pitched some of the dilemmas his team encountered during the process of urban design. Among others, he touched upon densification and building height as aspects that influence intensity of human interaction.

Located in the former industrial zone, Schinkelkwartier is an example of inclusive and interdisciplinary redevelopment. Destined to be a diverse mix-use hub, Schinkelkwartier will develop in several phases during 25 years. At an early stage local stakeholders and neighbors of the area were involved.

On behalf of Architectural Prescription Grisha raised questions about opportunities and risks offered by water-related location and complexity due to the amount of interested parties.

Local or guest, reach out and share what you think!

Accessibility and connectivity of the neighbourhood in relation to surrounding areas, ensuring ecological values of riverbank and meadows, making Schinkelkwartier diverse and integrated while self-sufficient.

The key challenge is fragmentation of the urban fabric caused be former industrial purpose of the location. It is being solved by bringing various actors to think together and connect their visions into one coherent and vivid image of the place. This is done by means of urban design, continuous mobility corridors and human scaling of the surroundings

The project is continuously collecting public opinion by organising neighbourhood meetings and connecting residents with migrating workers and businesses.

Stakeholders' inclusion, not only humans but flora and fauna