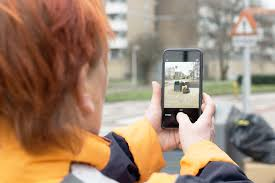 With the information of the mailmen, the municipality wants to improve it’s internal processes in order to increase the satisfaction of citizens concerning the way the municipality solved the problem reported.

The increased popularity of the city of Amsterdam puts extra pressure on keeping the city clean. Therefore, the municipality started a special ten-points program aiming to increase the properness of the city. A clean city is one of the basic conditions for a livable citiy.

However, 39% of the citizens who reported an issue, is not satisfied with the way the municipality dealt with the report.

Therefore, the municipality has asked the mailmen of PostNL to check the actual status on the street after the employee of the municipality confirmed that het executed the task at the location.

Next to this ‘fact checking’ on the street, mailmen will also be asked to report places where the municipality should take action to clean the street. Finally, mailmen will take surveys at people’s doorstep (randomly selected addresses) to ask the opinion of citizens and ask how the municipality and the citizens could improve their actions in order to keep Amsterdam a clean, livable and attractive city.

With the information of the mailmen, the municipality wants to improve it’s internal processes in order to increase the satisfaction of citizens concerning the way the municipality solved the problem reported.

Goals of PostNL
- To what extent can we ask the mailmen to check the actual status of a report in the public space?
- How do the municipality, citizens and the mailmen evaluate the project?
- To what extent can we help the municipality of Amsterdam to increase the livelihood of the city by collecting data on the public space using our mailmen and their smart devices?

We started in May 2017 with a small group of mailmen. During 2017, we scale up to six areas in Amsterdam, with in total approximately 180 – 220 mailmen in Amsterdam:
o Noord-West
o Osdorp
o Slotervaart
o Pijp / Rivierenbuurt
o Centrum West
o Oud Noord

Using the local presence of the mailmen on the street can deliver a broad variety of relevant information for policy makers and for companies cleaning the City. In this early stage of development, commitment of the management of PostNL as well as commitment of managers and de aldermen of the municipality of Amsterdam has been a crucial factor for success. Also, the close co-creation process of the municipality and PostNL has been a key factor for success.

Music Makes Change is intimate and open impact platform, that allows us to (re)connect, to feel the power of music, and to make lasting positive change in our communities, through civic engagement.

Artist / singer-songwriter Norman Vladimir believes that "one hour can change the world”. And that is why he, in partnership with Waag Futurelab, is excited to invite you to experience this special MMC edition, that combines live artists, awareness & action all in one event.

For this event, we are honoured to present singer-songwriter Luka (Lisa Lukaszczyk), who will both perform and be in conversation with us about topics like her music, her creative path, navigating the music industry, and taking control. Check her out on Spotify.

During Better Future Now Festival, Waag Futurelab and impact platform Music Makes Change are combining forces! A typical MMC edition consists of a talented musician/artist who is invited to perform an intimate set of music, followed by a conversation with the artist and a local volunteer organisation. This time we will discuss the concept of ‘hope’. How can we change the rules instead of fighting the system? Previous artist have been Marle Thomson, Kris Berry and Celine Cairo.
How can you attend? The event is free of charge, meaning we don’t ask for a financial payment. However, as always at MMC, the event will conclude with a mandatory sign-up by every attendee for ONE HOUR of volunteering with our featured local organisation, to make a powerful, local impact in our community and to round out the MMC experience. Just one hour of your time can already change the world!

About Luka
Born in Cape Town, raised and based in the Netherlands; singer-songwriter Lisa Lukaszczyk forms the creative foundation for her band Luka. Inspired by artists such as Feist, Sylvan Esso and Bon Iver, Luka exhibits a sound with touches of dreamy electro-pop, folk and soul. After having released 'Welcome, Generation Everything' in 2018, her debut album 'First Steps of Letting Go' (2020) is out now.​