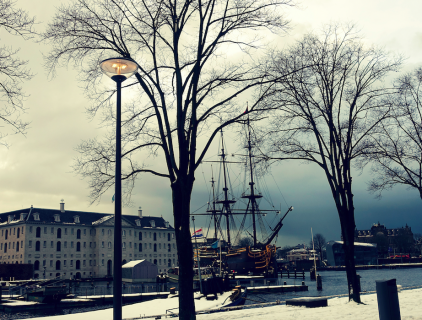 The Marineterrein was keen on developing a living lab for new technology and smart city use-cases. Lightwell helped to realize this ambition by combining its Friso Kramer public lighting fixtures with the most promising Smart Lighting technology available: LoRa.
The LoRa technology is a point-to-point internet of things communication system that uses the free available 868mhz frequency. At the Marineterrein Lightwell and technology partner Ziut decided to use a private (non telecom) network to secure its open-source character but also to guarantee the lifespan of the system. This is interesting for large metropolitan area's if they have smart city ambitions because the availably of the network is more secure if the City runs its own network and isn't solely dependent on a network-provider like a telecom-company. LoRa technology is therefore a future-proof system to which al kinds of features (censoring, lighting etc.) can be added.
The whole system set-up is on show at the Marineterrein. The 42 fixture can't be missed because of the beauty of the design by Friso Kramer.
During the We Make the City event 20-24 June 2018 tours will be held to explain the system functionalities.

To create smart and perfect lighting conditions for the whole area while also taking the design aspects of the historic Marineterrein into account. The Friso Kramer LED fixture used here combines both. Also, the LoRa network had to be a private network in so the acces to the network would be both free and easy to use by other parties, besides Lightwell and Ziut.

The goals (combining design + internet of things) where reached. The private LoRa network is accessible via the Loriot backend and the smart lighting is proof of the successful implementation if this innovative technology.

Since a LoRa network in the Netherlands is a fully functioning point-to-point IoT-network (rolled out by telco KPN) there is nothing anymore that stands in the way of large-scale smart lighting projects. One of the main anticipated objects against getting involved with IoT-networks on a large scale (the potential of the technology becoming deemed outdated by the telco) is now not a valid point anymore since this projects proves that a City can change to a private LoRa-network architecture.

City governments around the globe can learn what it means to own an IoT-network like LoRa. The perceived technological barrier isn't that great after all, the Lightwell/Ziut/Marineterrein LoRa project in Amsterdam shows.

Last night 8 of March we made a small movie about the project. We will update soon. And check out the www.wemakethe.city event, during the event will we do tours around the area to show all including the private gateway system set-up!

Data promises to unlock solutions to many of the major challenges of our time. Unfortunately, accessing this data is not as easy as it seems. Who wants to share business-sensitive data with a competitor? Or privacy-sensitive data? Due to uncertainty about security, privacy and data ownership, less than 1% of all data is actually used, shared and analysed. At the same time, as individuals and organisations we often give away our data – without even realising it. Large tech parties collect, process and use data to make a profit.

In response to these challenges, Amsterdam Data Exchange (AMdEX) aims to shape the future of a fair data economy where data owners can securely share their data. Central to AMdEX is the premise that data are not shared without permissions from data owner. What conditions would you set before sharing your personal data? Or competitively sensitive information? Or your research data? The session presents key experiences, dilemmas and lessons learned from the AMdEX initiative and invites the audience to contribute to the discussion.

About Data Dilemma Series
Data Dilemmas is a collaboration between Amsterdam Smart City and the City of Amsterdam’s Data Lab. Three times a year we explore the possibilities for using data and new technologies to address urban and societal challenges, with a focus on responsible digitalization. The goal is to use data to make cities more safe, clean and accessible. But what happens to all the data that is collected? Which dilemmas do we encounter when we collect (personal) data to improve the city? These questions are important for everyone: governments, knowledge institutions, companies, and civil society. Amsterdam Smart City would like to explore with you which decisions are needed for responsible use of data.

Registration
To join us please register via Evenbrite: https://www.eventbrite.com/e/data-dilemmas-fair-data-sharing-with-amsterdam-data-exchange-amdex-tickets-411897114357