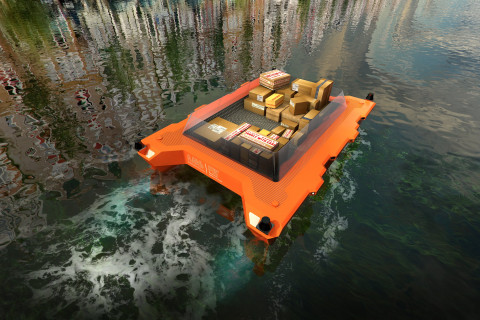 Carlo Ratti on stage at Pakhuis de Zwijger
What happens to cities and citizens when smart technologies start making their own decisions?
Imagine a city in which traffic lights autonomously organise the mobility flows in a city, where dynamic infrastructures know where and when to create temporary bridges during crowded events, and where smart grids independently distribute renewable energy sources. During this session of AMS Science for the City, we look at the future of our increasingly smart urban spaces. Together with special guest and AMS PI Carlo Ratti (MIT Senseable City Lab), we dive into the challenges, possibilities and prospects of senseable and autonomous cities. What is the added value of sensing for the city of Amsterdam? Can we create fully autonomous cities? What will they look like, and what is it like to live in one?

The use of sensors in urban spaces is an increasingly known feature in cities all over the world (think of the vehicle detection loops used at high ways and traffic lights; but also of the security sensors installed in the streets of Eindhoven). And the next step, towards autonomous cities, is not even that far out of reach. An example is the Roboat, developed by AMS Institute and MIT: a fleet of autonomous boats in the canals of Amsterdam, that monitors the environment, provides transportation and enables self-assembling bridges and other urban infrastructures.

Carlo Ratti & The Senseable City Lab
Special guest of the evening is Professor Carlo Ratti, an architect and engineer by training, who teaches at Massachusetts Institute of Technology (MIT), where he directs the Senseable City Lab. He is also a founding partner of the international design and innovation office Carlo Ratti Associati. At the AMS Institute, Carlo Ratti is Principal Investigator in Intelligent Urban Infrastructures.

In the last decade, Carlo has given talks around the world on the theme of Smart Cities. Two of his projects (the Digital Water Pavilion and the Copenhagen Wheel) were hailed by Time Magazine as ‘Best Inventions of the Year’. He has been included in Blueprint Magazine’s ‘25 People who will Change the World of Design’ and in Wired Magazine’s ‘Smart List: 50 people who will change the world’.