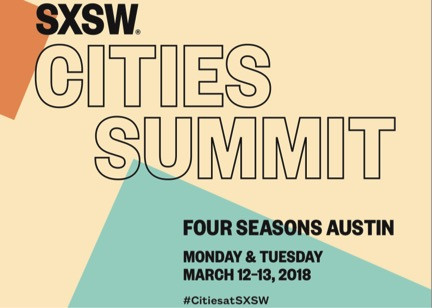 Are you a Dutch startup or entrepreneur that offers smart city solutions? Do you want to expand your business to the USA and do you want to share your ideas and vision about Urban Living with an international audience during the South by Southwest festival (SXSW) in Austin, Texas, USA? Then we are looking for you!

What is SXSW?
The South by Southwest Festival (SXSW) is a unique festival and conference gathering of the Interactive, music and creative industry, which is held from 9-18 March 2018 in Austin, Texas, USA. In recent years, SXSW has become a launching platform for successful companies like Twitter and Foursquare. Fortune Magazine called SXSW “the single best place in the creative innovation world to build relationships and to get to know people.” In 2017, SXSW equipped 421,900 people from 95 countries with a platform for achievement, inspiration and discover.

Smart Cities program
New this year in the official SXSW program is the Cities Summit, which is held March 12 & 13. The New Dutch Wave (NDW) House is an official venue of the Summit.
Tuesday March 13th, we will host a special Smart Cities Program in the New Dutch Wave House, where the visions of Dutch professionals and municipalities are shared on how they think the future will look like for cities in the world.

The New Dutch Wave Smart City program is a kick off to the second period of the Smart City Strategy that is being developed by the Dutch government together with national and International cities, startups and entrepreneurs.

So, are you a Dutch creative, startup, city or entrepreneur and are you specialized-or interested in Smart & Livable cities? Than come and share your ideas and vision about Urban Living during the South by Southwest festival.

Why should you join?
Your company will be part of the official SXSW program.
You will get the opportunity to pitch your smart city solution for an international audience (200-250 delegates of the City Summit).
You get a platinum badge for the SXSW Cities Summit and the New Dutch Wave program, including the closing networking event of the SXSW Cities Summit at the NDW House, valued at $1.650,00.

Registration
If you are interested in joining the delegation please send an e-mail to Youri Goudswaard at y.goudswaard@amsterdam.nl before the 5th of march. Include a short outline of your pitch (7 minutes on the theme: ‘The Future of Living’).

Travel and accommodation will not be provided and have to be self organized.

There is a limited number of places available. If the number of applicants exceeds the available spots the organization will make a selection.

Are you an Amsterdam-based entrepreneur, or do you work for an SME? And do you want to make your company more sustainable? Then draw up a proposal for an Impact Deal before 24 February and receive support from the City of Amsterdam.

What is an Impact Deal?

The City of Amsterdam (Amsterdam Impact) is looking for 10 Amsterdam companies that want to take concrete steps in 2023 towards becoming more sustainable or increasing their social impact.

In an Impact Deal, the entrepreneur and the municipality agree to increase that company's impact by, for example, reducing CO2 emissions by 30 per cent or hiring five job seekers at a distance from the labour market.

The deal must be as concrete as possible, and the entrepreneur should define goals, activities and outcomes. The municipality provides support by offering access to its network and consultations on topics such as financing and access to European funds.

Who is behind the Impact Deals project?

Amsterdam Impact and MKB Amsterdam are the initiators of Impact Deals. The project is part of Local Green Deals, created by the European Commission's Intelligent Cities Challenge.

Want to learn more and submit your Impact Deal proposal?

Visit the Impact Deals page (in Dutch) on the website of the City of Amsterdam.

City governments can have grand ideas and dreams about changing a city and revolutionizing services, but without a clear design and focus on building a base, many ideas and innovations can fall through. Amsterdam Smart City’s Programme Director, Leonie van den Beuken, was invited to speak about how to design a city from the bottom-up at the Smart City Expo World Congress in Barcelona.

Ralf Kleindiek, Chief Digital Officer and State Secretary for Digital Affairs and Administrative Modernization for the City of Berlin, and Caroline Paulick-Thiel, Executive Director for Politics of Tomorrow and the Co-Founder of nextlearning, joined her in this discussion.

Leonie highlighted that it is crucial to include residents in decision-making processes, but at the same time, we need to address how difficult the process and outcome may be. For example, if we want streets with less cars, residents need to give up their cars and find other alternatives. Key to designing the city from the bottom-up is to ask the right questions in an understandable and tangible way.

Watch the full interview and other interesting talks via the website Tomorrow. City: https://tomorrow.city/a/berlin-and-amsterdam-or-designing-the-city-from-the-bottom-up