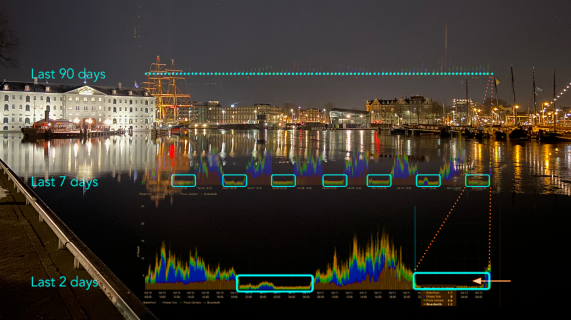 Wednesday was the official end of the Avondklok curfew in the Netherlands. Since 22 January 2021 the royal Dutch government issued a 9pm curfew to combat the third wave of the corona virus. The AD.nl reports that over these last 3 months, the dutch police have issued more than 95,000 fines for violating curfews.

Out of curiosity, I looked at the DrukteMeter 3 month Avondklok period to see if the Marineterrein community actually adhered to the national curfew.

The data says: yes, we did!

The table in the picture above illustrates that there are little to no people on the Marineterrein between the hours of 9 and 6am. Each night, activity on the Marineterrein stops, or flatlines just before 9pm (and 10pm as of 01 April). These insights tell us that we were all home in time and avoided curfew penalties and fines.

The Marineterrein DrukteMeter (or busyness-meter) anonymously counts the number of people in and around the innovation campus in order to keep the Marineterrein livable - especially during the Corona pandemic. This summer we’ll be using the DrukteMeter to visualize the safe and responsible transition into the New Norm and measuring the post pandemic “PULSE” of Amsterdam most popular destinations.