My contribution to the WeMakeThe.City festival 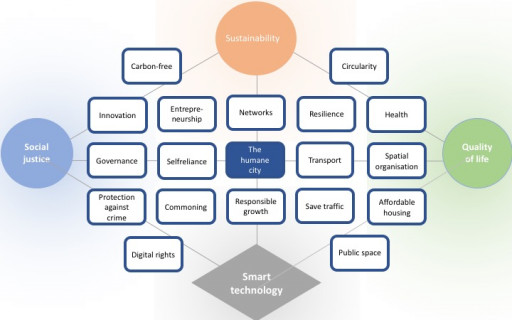 The development of a humane city does not happen on its own: It is a choice that requires a lot of effort. Once this choice has been made, deploying smart technology is self-evident. That is why the leitmotif of this series is 'Future cities: Smart by default. Humane by choice'.

Focusing on cities does not exclude the countryside and smaller municipalities. The reference to cities stems from the tendency of people to concentrate in urban areas. This concentration also has consequences for the less or unpopulated parts of the world and the oceans. Cities cannot exist without the rest of the world, but the balance is disturbed in many ways. Becoming humane also means developing an equal relationship between the city and its environment.

In this series humane is the result of the simultaneous application of three principles: sustainability, social justice and quality of life.

Sustainability:
Meaningful work and a fair income for all, which does not come at the expense of earth and nature or future generations' prosperity.

Quality of life:
The contribution of the man-made environment, including work, housing, community, education, care and other facilities to the growth of human capabilities and happiness.

Choices must be made within each of these principles and the three principles as a whole must be in balance. As a result, becoming humane is a process of growth, shaped by the contribution of many.

Technology and data do not have intrinsic value. Existing technologies stem from the pursuit of political and commercial interests and from scientific discoveries. Their impact has been destructive and blessing and inequality spread at the same time.
This series of small essays will provide examples of applicable technologies, recognizing that technologies that support life in humane cities partly have to be developed yet.

Urban policy and practices face a double challenge: Becoming humane and developing or deploying supportive smart tools. The 18 essays in this series represent each one of these challenges (figure below) and propose actions to address them.

Next week the first short essay, Healthy cities, will be published (in English and Dutch)
The next months I will investigate 18 aspects of the humane city and which technologies can contribute to its development.

The first one is about cities as not-so-healthy-places and the second one is about resilience: http://smartcityhub.com/governance-economy/future-cities-smart-by-default-humane-by-choice/

Thank you for your answer! I will enjoy your essays.

Mutual care (people care for each others) will definitely be dealt with in the article about 'commoning'. I hope that you will like this series.

I am waiting for your series, but I miss one aspect in your map. Maybe I am wrong, but would not "Mutual care" be part of a humane city?

Thank you for your insights!