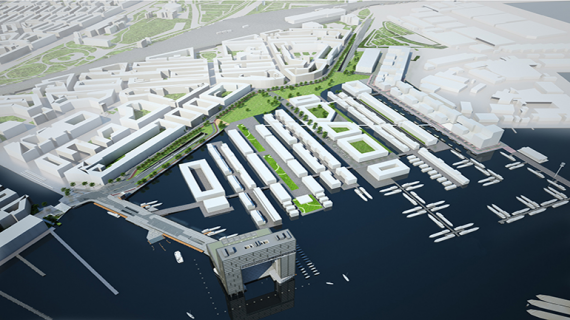 City-zen partners Westpoort Warmte and AEB have developed a plant which enables the use of cold from the adjacent river IJ for cooling of buildings in the Amsterdam Houthaven district.

About ten years ago the City of Amsterdam decided the Houthaven district had to become a 100% climate neutral area. The entire energy demand of the new-build homes, offices, school and other buildings had to be as sustainable as possible, based on the principle of ‘trias energetica’. Back then the city believed cooling would be in high demand for comfortable living. So it decided that all newly-build apartments had to be connected to a central cooling system. That’s how the idea for the comfort cooling system – a plant pumping cold water out of the river IJ in winter and storing the cold for cooling apartments during hot summer days – was born. In addition the apartments were connected to the city heat system in which heat is generated by the waste-to-energy plant AEB.

Combining the sustainable cooling and city heat system, every home in the Houthaven district emits 80 % less CO2-emission than apartments using a boiler and air-conditioning. But, more importantly, it creates comfortable living.

The cold plant is operational and the cold distribution network is in place. The first buildings in the district, an elementary school, is connected to the cold network and the first reactions are promising. In 2015 the first dwellings in the Houthaven district have been delivered.

Up to 300 dwellings will be connected yearly, until the Houthaven district is completed in 2021, with 2000 dwellings in total. The cold and heat grid will be developed in tandem.

NEMO for adults: visit The Studio at the Marineterrein

The Studio is NEMO’s off-site location at the Marineterrein in Amsterdam: Kattenburgerstraat 5, Building 027A.

A warm house, a quick microwave meal and a mobile phone that allows you to stay connected 24/7 – there’s no shortage of comfort and convenience in our everyday lives. But almost everything would grind to a halt if we were to lose access to one vital source: energy. At the moment, this issue is more relevant than ever, both in politics and among consumers. Our addiction to energy, dependence on fossil fuels and the effects of our energy consumption on climate change are
the focus of NEMO’s new exhibition for adults: Energy Junkies.

In the Energy Junkies exhibition, you get to make the decisions that will determine our future. How would you transform our energy addiction into a healthy habit? Create your own carbon diet, choose the right medicines from the climate pharmacy and dream about a world where we are cured of our energy addiction. The Energy Junkies exhibition opens June 8 2022 at NEMO's Studio, the off-site location for adults at the Marineterrein in Amsterdam.

The Equinox platform is a versatile, cloud based, framework that
supports sustainable portfolio management activity using an entirely
modern and open source approach. This year we submitted a proposal under Challenge 2 of the EU Datathon 2022 (Theme: Transparency in Public Procurement) that aims to integrate procurement data with environmental impact data. We have just learned that we have been preselected to enter the formal stage of the competition and would love to hear from the community about tangible use cases, challenges or any other input as we develop equinox further

On June 14 and 21 the 16th edition of our Demo Days will take place. This will be the first Demo Days on location (will be announced soon) since COVID-19. Our themes for these upcoming Demo Days are:

What are the Amsterdam Smart City Demo Days?
The Demo Days are one of the tools we use to stimulate innovation and encourage connection between our partners and community. The purpose of the Demo Days is to present the progress of various innovation projects to each other, ask for help, share dilemmas and involve more partners in a project to take these projects to the next level. In small groups we work on concrete questions.

We have created the Demo Days as a safe place for asking input from the network. A fresh perspective from another professional can be exactly what you need to move forward. You cannot work on a transition alone, which is why it’s important to involve others in your process. During these days, we also give the stage to community members to pitch projects and ask for input from our network.

That’s where you come in!
Not only are the Demo Days open for our community, but we offer you the opportunity to pitch your innovative initiative during the event. We want to involve our community more in the activities that we regularly organise, as you are an important part of the Amsterdam Smart City innovation ecosystem.

Are you working on an innovative project that could use some input? Or are you preparing for an inspiring event that needs a spotlight?

If it fits within our themes, sent a message to sophie@amsterdamsmartcity.com or let us know in the comments. We would be happy to discuss if it's a match!