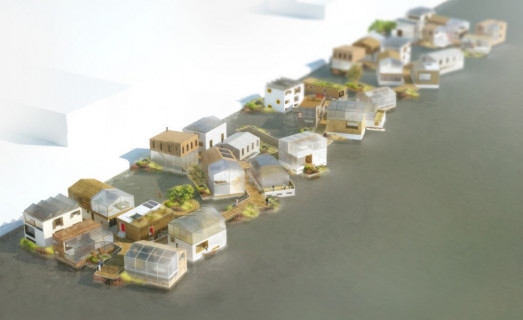 An intelligent grid for clean and shared distribution of energy

Sharing renewable energy between households in the Amsterdam building project Schoonschip. By coordinating energy supply and demand between the houses, the entire neighborhood aims to be energy neutral. Renewable energy from sun and wind has natural fluctuations. The demand for electricity will also change, for instance due to electric vehicles. A neighborhood will therefore only be energy neutral and self-sustaining by implementing a smart grid: an intelligent energy grid that coordinates the storage and distribution of energy between households.

Grid-Friends is led by Centrum Wiskunde & Informatica (CWI) and includes the Fraunhofer Institute for Industrial Mathematics (ITWM) from Kaiserslautern, the companies Spectral Utilities and Evohaus, and the Schoonschip Foundation. The project is funded through the joint programming initiative ERA-Net Smart Grids Plus, with support from the European Union’s Horizon 2020 research and innovation programme.

Developing and implementing knowledge about a smart energy system for the Schoonschip project.

All major findings will be published open access to allow similar initiatives to profit from the results.

Hi GridFriends!
We are a group of students from Lund University (Sweden), studying our Master in Information Systems. In one of our courses, we are doing a research about sustainable/smart cities in Europe and after reading about Amsterdam, the choice of city became easy!

By looking at this project, we see that you would fit very well in an interview about the smart city initiatives in Amsterdam from an entreprenoural point of view. We would be very grateful if you took your time to help us out answering our questions, which will take around 45 min - 1 hour.

If you would like a copy of our report when it is finished, we’ll gladly share it with you!

Please contact me and I will explain more: fredriksson.otto@gmail.com

Hi Pepijn, Peter,
Very cool project. Please share your updates, and let me know if I can help.