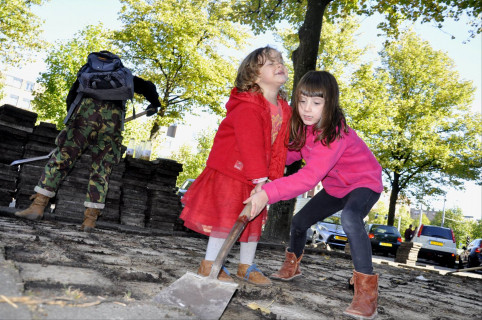 The aim is to empower inhabitants to (re)create their neighborhood by their own needs, ideas and wishes. Cities are transforming more and more into concrete jungles, leaving not much space for green zones. Whilst a green city is a healthy city: greenery reduces the urban heat island effect and sewage overflows. At the same time we can create green zones to stimulate biodiversity and happier inhabitants.

Another common issue we see in cities: the bigger the city, the higher the loneliness rate. Over 85.000 inhabitants of Amsterdam feel lonely, every day. De Gezonde Stad (The Healthy City) transforms all the uninviting squares in our neighbourhoods into green, vibrant, safe, attractive pocket parks where we can interact with each other!

The aimed result is a network of pocket parks in cities, starting in Amsterdam. The results so far are:

By facilitating this process and including inhabitants, local government and private parties, we create a city in which we all feel healthy and happy to live in. Recently, Park om de Hoek has also developed a toolkit for inhabitants to independently create a pocket park in their own neighborhood.

The next step is upscaling the project and strengthening the business model. Also, developing an incubation program to educate more active inhabitants in developing their own Park om de Hoek with expert sessions, workshops, offline tools and financing. This way we're creating more autonomy for inhabitants to make their city greener.

Robin and Bram, thanks for bringing my attention to this case!

Great initiative! Perhaps there is some potential in this project? http://weteringbuurt.nl/project/2614/casus-sociocratisch-experiment---bestemming-kostpleintje