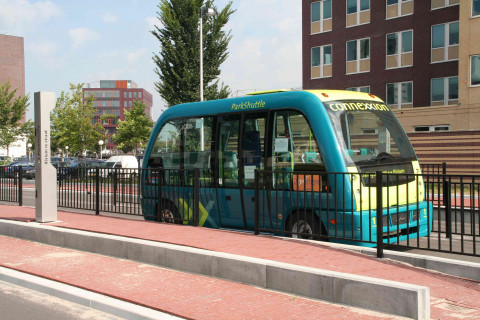 The ParkShuttle system is unique in the world in that it is the only automated system operating at grade, featuring (5) at grade intersections with other traffic, and is truly automated (no safety driver or steward)

The Parkshuttle connects the subway station Kralingse Zoom and business park Rivium in the city of Capelle aan den IJssel. A pilot operated between February 1999 to November 2001, with the system being extended and replaced with six 2nd generation vehicles in 2006. The application now features 5 stations, serving two business parks and a residential area, over a length of 1.8 kilometers. At the end of 2018 the system will be replaced and extended, with the autonomous vehicles running over public roads (without steward on-board).

The system carries up to 500 passengers per hour per direction and approximately 2,500 per day. Each vehicle accommodates up to 24 passengers, with seating provided for 12. In the peak hour all six vehicles are operational, with three alternating charging in off-peak hours. Where the vehicles operate at a 2.5 minute interval in the rush hours (to optimize capacity), the operator can select whether the system should operate on-demand or at a 5-minute interval in other hours of operation. The range of the vehicles is 75 kilomters, with recharging of the lead-acid batteries taking up to six hours

2getthere, the city of Capelle aan den IJssel, MRDH, TNO and several others.

The ParkShuttle system is unique in the world in that it is the only automated system operating at grade, featuring (5) at grade intersections with other traffic, and is truly automated (no safety driver or steward). With the introduction of the new system for Rivium 3.0, the vehicles will also run on the public roads. The extension connects towards the Zalmhuis and loops back over the Rivium Boulevard, increasing the catchment area of the system in the process. The operations are monitored by a single operator (per shift), who is also responsible for cleaning and sales of individual tickets.

The Parkshuttle system has proven to be safe and highly reliable, with a real transportation value. Cities can implement these systems as a better alternative for normal car traffic, creating a greener an more liveable area.