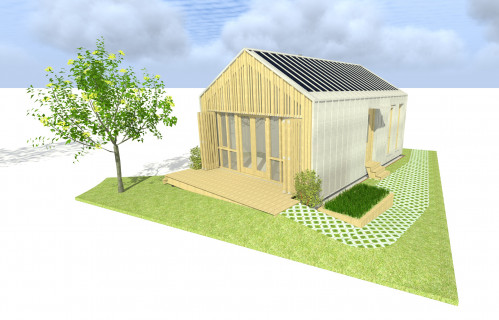 To put the design solutions for building low-cost, low-energy, high-performance homes into the hands of every citizen and business on earth.
To use digitalisation to make it easier for existing industries to design, invest-in, manufacture and assemble better, more sustainable, more affordable homes for more people.
To grow a new, distributed housing industry, comprising many citizens, communities and small businesses developing homes and neighbourhoods for themselves, reducing our dependence on top-down, debt-heavy mass housing systems.

The aim of the WikiHouse experiment is to make it possible for people to design and build their own home in a sustainable and affordable way. WikiHouse stands for an open source (freely accessible) building system, collaboration in a community, self-building, sustainability and affordability.

There are two phases in the experiment. In the first phase the WikiHouse concept has been further developed to meet the Dutch building regulations. Today, the first WikiHouse has been built in Almere. The WikiHouse was completed in December 2017. First it will function as a show model and after a few months it will be rented out as a social rental dwelling. In the second phase of the experiment around 20 WikiHouses will be built by self builders in Almere. The results of the experiment will be shared nationally and internationally so upscaling can take place.

The Woningbouwatelier (‘housing atelier’) brings together new concepts, knowledge and the experience of innovative parties in housing and uses experiments to pursue innovation. It’s ‘innovating by doing’ in living lab Almere. The step to actual realisation distinguishes the Woningbouwatelier from other innovation hubs.

Citizen science is on the rise and measurement communities are seen as equal by more and more governments and businesses. This is just as well, because they are the most important experts on their own living environment.

In this second edition of The State of Citizen Science we explore what it takes to democratise knowledge. How can citizen scientists and scientists work together in a satisfactory way? What do citizen scientists need from policymakers? And what can measurement communities around the country learn from each other?

The meetup will start with a panel discussion between a citizen scientist, scientist and policymaker. Then we'll break out into workshops. It promises to be an interactive meeting where the exchange of knowledge and experiences is central. At the end of the workshops there will be a tour of the DDW exhibitions in the Klokgebouw and drinks afterwards.