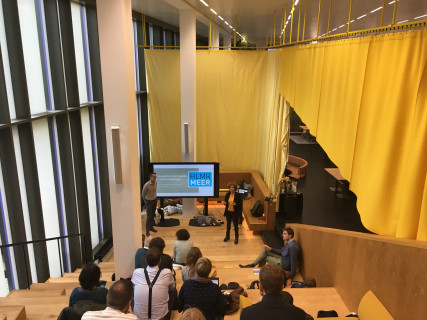 In a previous post we shared the experiences from visits in the first half of 2019. In this post we look at a cross section of delegations that visited Amsterdam Smart City during the second half of 2019.

1. Finish Association of Local and Regional Municipalities
Twenty-three mayors and elected officials from smaller Finish municipalities visited Amsterdam with interest an in sustainability projects involving citizens. Besides getting an introduction to Amsterdam Smart City, the group visited Pakhuis de Zwijger for a presentation and discussion with Servaz van Berkum. The project which stood out the most for this group was the Frans Halsbuurt redesign where 600 on-street parking spaces have been removed, providing residents with a unique opportunity to co-create the new public space. The delegates were impressed with the role of Pakhuis de Zwijger as a neutral facilitator of the co-design process and that the outcome is binding for the municipality. The delegates expressed that experimentation with citizens’ participation and co-creation is a key priority for Finish municipalities. It is also an area they would like to continue learning and exchanging experiences about.

2. City of Helsingborg, Sweden
This delegation of 12 city directors from Helsinborg municipality was interested in two main topics: 1. The “Amsterdam Approach”, or the reason why Amsterdam won the Innovation Capital award in 2016 and 2. Amsterdam’s experience and best practices on place-making topics. The delegation met with Amsterdam Smart City Program Director Leonie van den Beuken for a discussion about public-private collaboration and bottom-up innovation in Amsterdam. The group also met Stefan Bodecker from Placemaking Plus who shared a broad range of place-making projects and interventions in Amsterdam and the metropolitan area, especially in disadvantaged communities. Stefan’s message which resonated most with the group was that “place-making is a powerful tool to transform communities and you should focus where the problems are the biggest”. The program finished with a tour of Marineterrein Amsterdam Living Lab, Oosterdokeiland, and Central Station.

3. Singaporean Smart Mobility Delegation
A delegation of 18 public-private representatives from Singapore visited Amsterdam Smart City as part of a mission visiting the Intelligent Transport (ITS) Congress in Eindhoven. The group was most interested the possibility for Singaporean startups testing their solutions in Amsterdam. The group expressed interest in further exploring potential channels for collaboration and co-innovation between Dutch and Singaporean ecosystems on smart mobility, especially on autonomous vehicles (AV’s) and MaaS.

4. Association of Flemish Municipalities (VVSG), Belgium
A group of approximately 40 elected officials from Flemish cities and municipalities visited Amsterdam with a focus on smart, sustainable and circular cities. The full day study program started with introductory presentations to Amsterdam Smart City and the City of Amsterdam Chief Technology Office, followed by an innovation tour of Johan Cruijff ArenA. In the afternoon the group split up into two tracks. One group visited De Ceuvel, Schoonschip and Buiksloterham in Amsterdam North with a focus on circular area development, led by Frank Alsema of Urban Labs and Geert Litjens of Spectral Energy. The second group visited Epicenter digital innovation hub with a focus on data-driven innovations and smart mobility. This group met with Carlien Roodink from Axians, Christine Groothuis and Jeroen Brink from Municipality of Haarlemmermeer and Joey Fontaine from EV-Box.

5. Ecologic
As part of the Energy Future Exchange (EFEX) program, Ecologic Institute visited Amsterdam Smart City with a group of 13 public-private international professionals in the energy sector. The group was interested in the way public, private and civil society stakeholders work together on sustainability projects. These delegates were impressed with the rich ecosystem of projects and pilots, judging by the engagement and activity on the Amsterdam Smart City platform. They confessed there is often an appetite to start similar initiatives in their home cities but leadership is often lacking.

6. Southern Company
Michael Britt, VP Energy Innovation Center at Southern Company visited Amsterdam to connect to key innovations related to smart energy and smart grids. Amsterdam Smart City facilitated a visit to Quby with a focus on smart home / energy devices, as well as a meeting with Alliander Strategy Director, Pallas Agterberg to discuss the role of Alliander in the Amsterdam Smart City program as well as with the broader energy transition. Reflecting on the program, Britt praised the way public and private, large and small parties work together in Amsterdam and wanted to bring a similar approach to Atlanta and other places where Southern Company operates.

7. Korea Electronics Technology Institute (KETI) and Gwangju City
This delegation of 12 researchers and governmental representatives was interested in innovations related to data-driven and citizen-led air quality projects. After being introduced to bottom-up projects such as Hollandse Luchten and ClairCity, the delegation dove deeper into the discussion of how big data can help improve decision making on air quality topics with Martin Smit from Caeli.

8. Trianel Cooperation, Germany
A delegation of 14 city and utility managers from small and medium-sized German municipalities visited Amsterdam with an interest in innovative technologies and business models. The group started out the program with an introduction to smart energy developments in Amsterdam and the Netherlands by Adriaan van Eck from Flexiblepower Alliance Network. The group also discussed the governance and evaluation of smart city projects with Marije Poel from the Smart City Academy at the Amsterdam University of Applied Sciences and dove into technical discussions and demos with Hubert Penn from Dexter Energy and Geert Litjens from Spectral Energy. Participants communicated that a key challenge for German municipalities and utilities is a lack of mandate or responsibility to facilitate public-private collaboration. While there is a desire to work together, it is not anyone’s responsibility to initiate action. In this sense, participants were impressed with the role of Amsterdam Smart City as a facilitator and its continuity over the past decade. The group wrapped up their program with a meeting and tour of the Johan Cruijff Innovation Arena, hosted by Huib Passman.

9. Nikken Sekkei Research Institute (NSRI) & Fudson, Japan
Amsterdam Smart City hosted NSRI & Japanese real estate developer Mitsui Fudosan for a program focused on organization and governance of smart city programs and projects. The delegation was interested in the role of Amsterdam Smart City in smart city projects, and lessons learned which could be transferred to Kashiwanoba smart city project in Japan. The program focused primarily on the evolution of Amsterdam Smart City from a European-funded project with focus on implementing smart energy / smart grid projects, to an ecosystem facilitator. The delegates were most impressed with the transparency of the community platform and thought this could be a way to facilitate closer interaction between professionals and citizens, which is a key priority in the development of Kashiwanoba.

10. City of Reykjavik, Digital Transformation Team, Iceland
Once the City of Reykjavik had set out to develop a smart city data platform and warehouse, their Digital Transformation team visited Amsterdam to learn from its experience on similar topics. A roundtable discussion was hosted at City of Amsterdam’s Data Lab with contributions by Tamas Erkelens from the Chief Technology Office and Hein Wils from Information & Statistics Department. The discussion focused on Amsterdam’s experience and lessons learned from setting up DataPunt – the smart city data infrastructure which makes data about the city findable and accessible for further processing by employees of the municipality as well as the general public. The meeting was followed by the international edition of the Data Dilemmas event where representatives from Reykjavik and Boston shared data-driven projects and related ethical dilemmas along with Amsterdam and Hilversum.

To achieve this we will prioritize delegations that would like to share projects and lessons learned on key topics of interest to Amsterdam Smart City partners and stakeholders:
• Data-driven innovations contributing to clean energy, circular economy, and emission-free mobility
• Use cases and standards for 5G, IoT, digital twins and data platforms
• Data management and cyber-security for responsible digital cities
• Collaborative innovation methodologies: best practices for facilitating innovation between public-private stakeholders

Opportunities for the Amsterdam Smart City Community
Another key priority for 2020 is to further support Amsterdam Smart City partners in the broader ecosystem with sharing knowledge and best practices with international delegations. Are you active in hosting intentional delegations for knowledge sharing programs by means of lectures, workshops or otherwise? Share your program offer on the Visits page.

Questions, comments or suggestions?
Reach out to cornelia@amsterdamsmartcity.com

IoT has a fluid state now; as we live and interact in an increasingly connected reality. We also see this evolving into new extremes, such as the discussions about Web3, the metaverse, and digital twins. At ThingsCon we feel the need to extend this discourse into understanding more about what is the real//real and what is virtual//real. 9 & 10 June the ThingsCon will meet again in person after two online editions in Rotterdam to exchange the latest insights and mark this new reality.