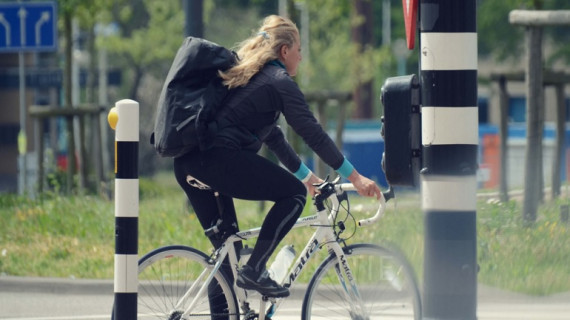 On Thursday March 24 Addy Verschuren (alderman Zaanstad) and Yvonne van der Hoff (region manager Havenbedrijf Amsterdam) were the first to receive discounts by cycling in the revitalization project for employees and residents of the area Westpoort/Sloterdijk – Zaanstad. Cycling to receive a discount in regional shops is one of the incentives to get as much motorists on their bike during rush hour.

Cycling more attractive for motorists Making cycling more attractive for motorists during the morning and evening rush hour is the main goal of the project. Cycling infrastructure is improved, existing fast cycling routes are promoted and a rewarding system is created to tempt residents and employees to take the bicycle to go to their job. With a special and free app cyclists keep track of the kilometers they’ve cycled which will be equally converted to a discount The goal is to get 1600 people on their bike to unburden busy rush hours in the north west side of Amsterdam. ‘’We hope a lot of employees from the area will commute by cycling’’, says Verschuren. They can apply for the project through this link and by downloading the app Ring-Ring.

The Bike coalition (FietsCoalitie) The project is an initiative of the Bike coalition (FietsCoalitie), a team of bike-lovers: Havenbedrijf Amsterdam, TNO, Amsterdam Smart City, Count&Create, BRIGHT UP and Ring-Ring. The project is supported by the municipality Zaanstad, cityregion Amsterdam and the program Beter Benutten. The main goal of the partnership is: more cyclists and less traffic jams in the area Westpoort/Sloterdijk and Zaanstad. Together with existing bicyclers like ambassadors, other residents, contributors, associations and employers they want to involve motorists in the project. Through cycling ambassadors, rewarding cyclers with discounts, involving the community, the partnership wants to enhance a structural change in behavior of motorists. They want to change the attitude and behavior that residents and employees have towards commuting and also create more awareness amongst employers, associations and other organizations in the area. Each party has an interest in reducing travel time, making the harbor area more sustainable and contribute to the health of residents and employees.