Tada and the City of Amsterdam: The first six months. 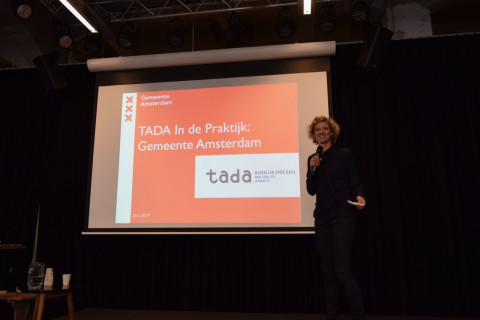 “Tada is a movement,” says Douwe Schmidt during the opening of the Tada in practice meeting. “It is the interaction of a large number of organizations and individuals that are focusing on the question: ‘What kind of digital society do we want?’ It is no longer a matter of determining whether or not we will have one. Now it is all about how to put that society into practice.” Over the past four months, the Municipality of Amsterdam and Bureau Tada have worked together to explore how the six Tada values can be put into practice. At the meeting, insights were shared with nearly sixty participants.

The practical implementation of Tada does not translate into a one size fits all approach. Unlike prescriptive legislation such as the General Data Protection Regulation, Tada is not a user manual that provides specific rules. Ethical principles like ‘the human factor’ and ‘from everyone – for everyone’ are soft values that need to be reinterpreted time and again. “Ethics cannot be outsourced,” says Tessa Wernink, who partners with Schmidt in Bureau Tada. “It is important for everyone to think about that in their work. Tada has taken the first steps by formulating six principles. These six points are not much different than established ethical values. But now it is a matter of applying them to the digital domain.”

“It is allowed, but we won’t do it”
Two speakers share stories from their own practice. Koen van Nol, legal expert at Schiphol, is involved in a pilot project involving ‘biometric boarding’ at the airport. In the experiment, boarding pass checks and passport checks are replaced with facial recognition. One of the insights Van Nol shares is that your organization’s identity plays a role in the decision-making process. “At each step, we verify whether it is legally allowed and whether it is technically possible. But in some cases, we reach the conclusion: it is allowed, it is possible, but we are not going to do it. That has to deal with the Schiphol identity. I have noticed in conversations with colleagues that Schiphol employees consider that very important. As a semi-government body, we believe that we hold a certain responsibility towards our customers.”
Jaap-Henk Hoepman, senior university lecturer at Radboud University in Nijmegen, explains how to make abstract values more tangible, transposing them into technical projects: “Privacy is a soft term. It is partly about ethics and partly about legal aspects. That makes it harder to implement than more tangible software attributes like security or performance.” To offset that, Hoepman developed eight privacy-by-design strategies. One of those strategies is minimization: do not collect more data than necessary. Another is abstraction: only share the specific information that is needed. For instance: the Gall&Gall sales employee does not actually need to know your date of birth; they just need to know if you are over 18.
Lessons Learned

G4 trainee Milou Jansen then stepped up on stage. For six months, she worked with Tada Agency on implementing Tada in the Municipality of Amsterdam, adopting the role of Values & Digitalization consultant. She shared some insights that recurred frequently during that project: Decisions about responsible data use must be taken at all levels of the organization. However, it is still all too common to see such decisions ending up with the data analysts. This could result in the unintended situation where data analysts become some type of gatekeepers, who need to encourage other people to use data responsibly. It is important for other employees to also consider this their responsibility. As a result, thinking about data use becomes an integrated part of everyone’s work. By extension, clients and contractors share a joint responsibility for data use. It is therefore important to discuss this at the beginning of a project. Take the time early in the process to carefully consider everything together. That will prevent delays later on in the process: take a moment to think at the start so you can accelerate later.

What can we do in tangible terms?
Milou Jansen bids farewell to the Municipality of Amsterdam to continue her traineeship in Utrecht. That is why she invited the attendees to join her in considering the question: ‘what next?’ during the interactive part of the meeting. The attendees joined in a discussion about applying Tada in the Municipality of Amsterdam. The discussion clearly revealed two things. On the one hand, it was considered valuable that Tada does not provide strict guidelines, but rather requires constant reflection. On the other hand, there is also a need for certainty – not just for civil servants, but also for citizens who need to be able to monitor what the municipal authorities are doing. People offered ideas related to both aspects in order to anchor Tada in the organization.

First, people in the organization need to become aware of Tada. Communication as well as meetings arranged within the organization will help create support amongst municipal employees. That should lead to a sense of responsibility which is felt by all the process owners, not just the specialists. Tada is not an exact science, so it requires employees to use their moral compass. That takes time: time to think, time to engage in dialogue, time to ask each other questions. People also mentioned developing a course on Tada, ethics and technology, and appointing ambassadors.

A number of suggestions were also made for ways to express Tada in more tangible terms. Pick a spot on the horizon: what is our course of action with Tada? Based on that distant view, we can draw up clear policy frameworks and work processes. Also appoint watchdogs that monitor the Municipality – like consultative groups, ethical advisory committees or a digital union. Finally, someone suggested expressing the abstract Tada values in more tangible terms by providing examples from actual practice. That will create common ground based on examples.

The conclusion of the overall discussion was that a cultural change is needed. The word Tada should not evoke confused questions; instead, it should be met with enthusiastic recognition. Not: Tada? But: Tada!

The Tada in practice meeting was a co-production of the Municipality of Amsterdam and Bureau Tada. It took place on 20 February 2019 at the Stadstimmertuin in Amsterdam.