The secret to citizen engagement. Lessons from a Manchester success story. 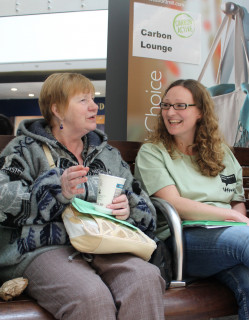 Does your project’s success depend on the involvement of citizens? But are you struggling to interest or motivate them?

In Manchester, Dave Coleman and his team have developed a method with which they have so far managed to excite and engage over 4.000 people about climate change. Not just the usual suspects, but people from all walks of life, such as Somali refugees, unemployed social housing tenants and children.

Curious to know what their secret to success is? Read it here

A few minutes ago we were all nodding our heads in agreement but now everyone in our meeting room fell silent. None of us had an answer to the question that had just been raised: “Involving citizens is important to our project but how do we make it happen?” As the silence continued, I realized: we are all citizens ourselves but as professionals we struggle with how to get ‘them’ on board with ‘us’. How odd…

When I started doing a bit of research on the subject, I found out we were not the only ones having a hard time. Recent research on smart city projects from the University of Amsterdam (UvA) said: “In most smart city definitions, citizens are considered to be the key users and should be the main focal point for the smart city technologies that are being developed. In the projects we evaluated, we rarely found evidence of this. Citizens were never really central and seldom an official part of the project partnership”

I sighed with relief - thank goodness, it’s not just us! Apparently many of us working in energy transition or smart city projects struggle when it comes to engaging citizens.

But off course that wasn’t actually good news. If we want to create change, and have an actual impact, we need people to (want to) join our projects or causes. But how?

For many of us it’s common practice that, after the project is carefully planned and designed, we bring in the creatives and ask them to develop a sticky campaign to arouse citizen enthusiasm and involvement. When this doesn’t get the response we hoped for, we blame the campaign. This, as it turns out, isn’t quite fair (according to the UvA research):

*“Often assumptions were made about what citizens wanted or needed, without being thoroughly verified by consultation with those citizens. Moreover, many mistakes were made in determining the way of involving users in the project.*”

So what is? What is the secret to citizen engagement? The subject started to feel like a mysterious black box to me; what on earth gets citizens going? Or, even better, gets them to stand still and reconsider their thinking or behavior?

Salvation came unexpectedly. Last March, when visiting Manchester, we had the pleasure of meeting Dave Coleman co-founder and Managing Director of the Carbon Literacy Project (and member of our City-zen Advisory Board). He amazed us. With the Carbon Literacy Project he had so far managed to excite and engage over 4.000 people (!) in and around Manchester about climate change. Not just the usual suspects, but people from all walks of life, such as Somali refugees, unemployed social housing tenants and children. I couldn’t wait to get the inside line from Dave to how this was done. Fortunately he was willing to share it all.

The Carbon Literacy Project emerged from Manchester’s climate change action plan ‘Manchester: A Certain Future’, written in 2009. Next to an ambitious goal for reducing the city’s CO2 emissions, the plan pledged to ‘engage all individuals, neighborhoods and organizations in Manchester in a process of cultural change that embeds ‘low-carbon thinking’ into the lifestyles and operations of the city’. You can’t however expect a process of cultural change to happen if people don’t have enough knowledge or understanding of the carbon impacts of their activities. So one of the objectives of the plan was to make people ‘carbon literate’.

In 2010 Dave and his ‘Cooler Projects’ business partner Phil Korbel, decided to take up the carbon literacy challenge. Because, as Dave put it; “if we want change, we need people to just get it”.

The Carbon Literacy Standard: anything but standard

This was no easy task. The aim, as formulated in the plan, wasn’t to develop some kind of awareness campaign but to offer every citizen within Greater Manchester ‘one days’ worth of learning’ about climate change. Dave and Phil brought together a voluntary 30-person working group, consisting of people drawn from all sectors, to work collectively in developing an approach to engage people. They called it ‘The Carbon Literacy Standard’. Their approach however is anything but ‘standard’. Instead of developing an ‘off-the-shelf’ training course to make people ‘carbon literate’, they decided to create a different kind of program. One that turned out to be very successful because it has adopted a very distinctive (learning) method. A method in which people not only gain knowledge about climate change but actually become involved in the subject and start to care about it.

So what is their method all about? How do they manage to turn those heads around and influence behavior? The answer is both short and simple: by putting those they want to reach at the heart of everything they do. They don’t focus on what they want or think is important but on what is meaningful to others and works for them. Is it that simple? Yes it is. The hard part off course is in actually doing it. And how. Here are three key elements the CLP works by that are universally applicable to every project whose success depends on engaging others:

1. Always speak in terms of the other man’s needs

At the Carbon Literacy Project they focus on what they call ‘local learning’: trying to make whatever you are trying to teach (or tell) as relevant as possible to the person at the other side of the table. “Nobody will show up just to talk about climate change” Dave explains “it all starts with finding common ground. Talk about something they are interested in and show them how climate change is tied up with that.”

Dave illustrates this with an example: How do you reduce the number of FC United fans driving to soccer games? Not by telling them it is better for the environment to take public transport but by talking about things they care about: “take the Metro and everyone can have a beer, you travel together with your mates, you will save a few pounds and you don’t have to worry about finding a parking spot…. “ Or by enhancing their pride of FC United: “our club is doing something about climate change and we are going to do it much better than others.”

Dave emphasizes that is important to “always speak in terms of the other man’s needs” referring to one of the principles from Dale Carnegie’s famous book ‘How to win friends and influence people’. “Ask yourself; what are they interested in right now? And then try to find the overlap. It is all about shaping it into somebody else’s needs or interests.”

Dave’s words remind me of a quote by another bestselling author[2]: “First seek to understand and then to be understood.” If you want to engage people into whatever your cause is, first make an effort to immerse yourself in what is important to them. Only then you will know how to spark their interest. Now of course that isn’t always easy but it will pay off; it will earn you people’s attention and willingness to be involved in your project.

2. Invite those that are essential to your project in from the start

At the Carbon Literacy Project they believe they can’t know what kind of training works best for you, your group, community or organization. What works well in one group or community might fail in another. That’s why they have embraced a concept that Dave calls ‘crowdsourcing the training’. Which means you – the person working to achieve Carbon Literacy in your group - get all the help and input you need, but you customize the training for your group and, whenever possible, deliver it yourself too (more about that in #3). As Dave says: ““We don’t focus on form but on outcome”. They trust that, with the right guidance, these ‘trainers’ will be able to put together a better working training program, fitting the needs and interests of their own group, than CLP would have. And thus creating a better outcome.

In addition, they emphasize the importance of a concept called ‘group enquiry’. This means that during a training you do not tell people what to do differently to reduce their carbon impact but you let the learners, with input of expert knowledge and peer support, jointly find their own answers and devise their own solution. Or as Dave puts it: “We just create the space, provide the necessary knowledge and people find their own way to the answers” This maximizes the participants’ sense of independence, expertise and purpose in responding to climate change and thus will increase ownership and their motivation to act further.

So how does that translate to us working in smart city or energy transition projects? If you want to influence people’s thinking or behavior, do not only immerse yourself in what is important to others but also invite them in from the very start. Don’t try to put it all together by yourself first and then reach out, but work together with those that are essential to your project from the very beginning. You can be the driving force but put your ego aside: be open to unexpected ideas and approaches of others. This will not only create a better outcome but it will also boost enthusiasm and ownership with those that are essential to the success of your project.

3. Focus on a peer-to-peer approach

At the Carbon Literacy Project they believe that “training is most trusted and best delivered by peers”; people who, to the learner, “feel like themselves”. Dave explains: “Information becomes more credible when it is told by peers, by ‘people-like-you’, not some expert talking down. I, for example, wouldn’t be credible to most soccer fans. I simply don’t look and sound the part. It’s better to take somebody they already respect. Someone they share a common background with. Research shows that peers are the most trusted source of information” That’s why Carbon Literacy training is mostly delivered by someone from the group it focuses on.

So, if you want people to be open to your project, work together with a few (respected) members of that specific community. Find likeminded people and involve them as your local ‘ambassadors’ and work together from the start in formulating your message and determining the way of approaching people.

Now to many these three lessons from Manchester might feel like stating the obvious. Nothing new. And you are right. Deep down most of us already know these things. And that’s great. But we don't always do them. Now what it takes is courage. Courage to start putting what we know into practice. And making an effort to really connect. Because, let’s face it, engagement is a two-way activity. And it starts with us.

Thanks for this contribution. I consider ist as very helpful!