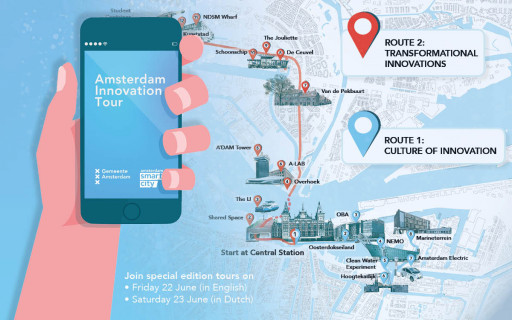 Those with an interest in urban innovation topics can now discover what makes Amsterdam an innovative, smart city without the timing and logistical constraints of a guided tour. The new self-guided Amsterdam Innovation Tour enables local and international stakeholders to immerse themselves in learning about the City’s innovative projects at any time — day or night.

In any given year, The City of Amsterdam and Amsterdam Smart City (ASC) receive hundreds of requests from local, national and international delegations interested in visiting and learning about Amsterdam’s urban innovations and smart city projects. In the face of rising demand, there was interest in developing a self-guided tour that could facilitate knowledge transfer and increase impact in a cost-effective manner.

The Amsterdam Innovation Tour app was officially launched in June 2018 by Touria Meliani, Amsterdam’s Vice-Mayor of Culture & Digital during the Next Generation Cities conference, part of the We Make The City innovation festival.

For the first two months, a pilot was carried out whereby participants could begin their tour by activating a video-message on a JCDecaux digital screen.

The app is available in the  Apple Store and Google Play.

The project was launched by the City of Amsterdam Chief Technology Office and Amsterdam Smart City. Following an open call for proposals on the Amsterdam Smart City platform, which resulted in fourteen submissions, Bureau Design Digitale Zaken (BDDZ) and Moqod were selected to develop an app-based innovation tour. Other project partners include JC Decaux, Brandijzers and Lucas Brailsford Design Studio.

The next steps are to develop audio and video content and enhance the AR functionalities.

The main lessons learned are:

Do you have ideas or suggestions for how to improve the Innovation Tour? Share your feedback or experience on similar projects in the Discussion section or email innovationtour@amsterdamsmartcity.com.

How can we ensure financial and energy accounting and disclosures of organizations reconcile at a fundemental level? At the macro / statistical level we have environmentally extended input-output frameworks that connect the dots between sectors and help trace benefits and responsibility across the economy. In a new white paper we explore how we can achieve a rigorous linkage of energy flows to monetary flows from an individual accounting entity perspective.

The proposed integrated accounting framework imposes on energy related non-financial disclosures the same double-entry balance constraints that apply to conventional financial accounting and statements. We identify the key ingredients required for a rigorous multidimensional accounting framework in terms of concepts, postulates and design choices, and we illustrate these ideas with a worked-out example of linking financial and energy accounts.