Your pollutant is our resource! 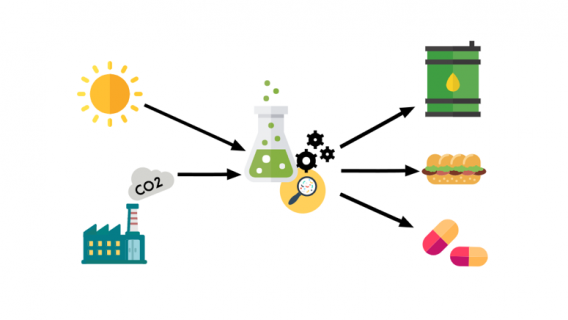 From bacteria to building-blocks

We aspire to creating a bio-based economy – one that meets its energy and production demands by leveraging biotechnology. CO2 produced in the city’s industry pollute urban environments. But what if this pollutant can be captured, stored and used as a resource to synthesize valuable chemical building blocks? This idea is called Carbon Capture and Utilisation (CCU).

Our aim is to optimise cyanobacteria to use CO2 for the production of (until now) petroleum derived chemical compounds, creating the foundation for a bio-based economy. We will genetically modify the bacteria to make them produce a valuable compound called fumarate. Fumarate can be used for numerous applications, including; a progenitor for biofuels, food additives and medicine. This would make a bacterial cell factory! Amsterdam gets rid of its CO2, while diminishing petroleum dependence at the same time.

We plan to have the results in november and will present them at the MIT in Boston.

iGEM is a biology competition initiated by the massachusetts institute of technology (MIT), located in Boston. Our team consists of 8 students from both the University of Amsterdam and the Vrije Universiteit. Disciplines range from bioinformatics and systems biology to political sciences and computer engineering.

Partners of the team are the UvA, VU, DSM, Matrix Innovation Centre and United Consumers.

After months of fundamental research, the next step will be to scale up the project and explore implementation in industry. For this, we need partners in the city and surroundings of Amsterdam. We need to process real data in order to quantify demand, production costs and design.

The use of bacteria in biotechnology, agriculture and food production is of paramount importance and will play an important role in CCU. Due to the scalability of cell factories, it can provide a solution for every city!