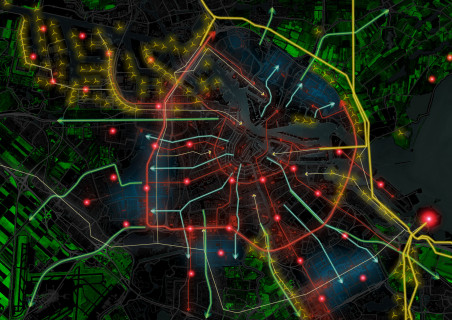 Using flow analysis to validate and quantify the spatial impact of measurements for circularity and using urban design to see how these measurements can be integrated in the context of the city.

More information can be found in my booklet. Or for further information or requests I can be contacted. I will be happy to try and answer the questions/requests.

The main products of this graduation are a new pattern language to map difficult/technical interventions in spatial tiles, a GIS model for assessing urban metabolism potentials and restrictions and a new approach for applying urban metabolism measurements on neighbourhood level.

This thesis report was done as part of the graduation of the master track Urbanism, at the TU Delft. The design studio was on urban metabolism. It was done partially through the AMS (advanced metropolitan solutions).

The next step of the projects would be speak/be in contact with engineers and specialist to further improve the GIS model. The assumptions for the interventions in the GIS can be discussed, improved and validated.
The idea is also to continue to work on the spatial tiles and the design to create a better communication language so urban designers and planners can more easily design with these interventions, helping to create more sustainable cities.
And hopefully using and applying the GIS model in practice, since now it has only been tested for geothermal in Amsterdam.

The GIS model for assessing circular interventions can be a helpful tool for cities. Showing where in the city interventions are (im)possible and (un)favorable. Making quick scan for the city with the GIS model can show where which intervention has the most potential in an area to achieve circularity.
While the spatial tiles can help to make the complex literature/regulation of these interventions to be spatially depicted, making it easier to communicate through the different actors.
The design process followed in the projects helps to make spatial explorations for the location. This simple design exercise shows how much it is possible and whether it is desirable, as it shows quantified impact and spatial impact. This can also help communicate to residents and parties in the discussion as to what it produces and whether it is desirable. By the design process we can create the added value of circularity, such as economic or social.

Our team is looking to expand! We have multiple opportunities from starter to senior levels. Have a look, tag or share with your friends,... or download the details for yourself of course 😉

On 2 & 3 June, EIT Urban Mobility is organizing a learning and networking event with inspiring mobility thought leaders at AMS Institute in Amsterdam. During the Mobility Solutions Cities' Showcase, urban mobility innovations from across Europe will be demonstrated.

EIT Urban Mobility has evaluated several applications from innovation-to-market projects and compiled a catalogue with Mobility Solutions from which some will be presented on June 2nd. Amongst others the projects SmartHubs (presentation by AMS Institute's innovation director Stephan van Dijk) and Code the Streets, in which Amsterdam and AMS Institute collaborate will have the stage. This will be followed by a keynote speech from Prof. Dr. Marco te Brommelstroet, co-author of Het Recht van de Snelste

Do you want to join and learn more about our mobility solutions and content-driven sessions on active mobility? Register in the link attached! https://bit.ly/3xp2X4A

eHUBS are starting to play an important part in the development of sustainable and liveable cities. As the shift to more sustainable transport becomes increasingly urgent, we must develop services which provide a real last-mile alternatives to the private passenger car. This is where eHUBS come in. An eHUB is an on-street location where electric shared mobility services, from escooters, to ebikes and cargo bikes can be found and used. These mobility hubs have the potential to significantly change the future of urban mobility, creating accessible, affordable and centralised shared mobility services. In this conference, we share experiences and exchange ideas about the current use and future of eHUBS.

The conference will explore the role of eHUBS, the lessons learned from cities pioneering them and opportunities for the future found by universities. Across two days, we hear from local authorities, universities, and mobility experts, sharing knowledge and inspiring their peers.

Several European cities are already experimenting with eHUBS, piloting the concept to create cleaner, sustainable and livable cities. This eHUBs conference is a result from the eHUBS project, which is funded by the Interreg NWE Programme, with six partner cities from five countries implementing the shared mobility concept, paving the way for others to do the same.