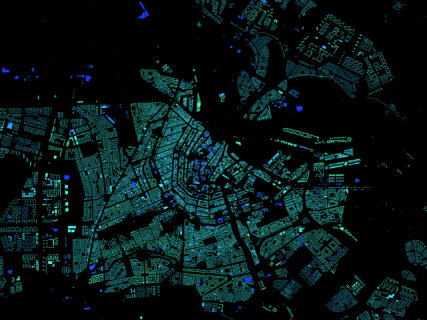 Overall, most assumption were found to remain valid, although the validity of some assumptions could not be indicated, specifically due to the lack of access to roof spaces. However, five assumptions were found to be in need of revision, these are briefly listed in this chapter together with associated revision recommendations.

1. Buildings before 1900 were found to not include steel in the load-bearing
structure
Construction year data from the BAG register is available, which could provide
an indication of the metal content of the load bearing structure. Inclusion of the
construction year in the dataset, combined with a with a lower steel score for
buildings built before 1900, should be considered.

2. Apartments smaller than 75m2 were found not to have a separate toilet and
bathroom, instead the toilet was present in the bathroom
The assumed amenities of the 55 - 75m2 standard apartment could be changed to
one kitchen and a bathroom with toilet. The impact on the metal content should
be researched and adapted when change is found to be significant.

5. Some buildings were found to use electric cooking appliances rather than gas
The absence of gas connections in the kitchen is likely to lower the copper content
of the building. Because policy objectives increasingly aim to disconnect from
the gas infrastructure (ECN, 2016), it is recommended to research its impact on
the amount of copper in buildings to be able to accurately estimate the copper
content in the future.

PUMA is a project from the AMS research programme which focuses on exploring Amsterdam's 'urban mine'. The concept of 'urban mining' has not been clearly defined up to now. It is even less clear what an urban mining system should look like. Which factors are important and what roles can they play in an urban mining system? What incentives are there for setting up such a system? What obstacles will be encountered and how can they be removed? How these choices are made also depends on whether we regard urban mining as a local initiative or something that has to be tackled at a higher scale, in other words at national, European or even global level. It is also important whether we believe that governments should be responsible or that this is primarily a task for companies. The PUMA consortium consists of researchers from Leiden University, Delft University of Technology, the Waag Society and Metabolic that is carrying out research into this.

The project was running from 14 January 2016 to 31 December 2016 and involves the development of a geological map of Amsterdam showing the presence and availability of certain metals (iron, copper and aluminium), with a focus on the built environment. A second goal is to explore the possibilities for extracting the metals from this urban mine.

The project is a joint research of TU Delft, Waag Society, CML Leiden University, and Metabolic.

The researchers intend to take this idea further in other, larger projects, funded for example by the EU Horizon 2020 program or the KIC Raw Materials.