SEEV4-City: Smart, clean Energy and Electric Vehicles for the City 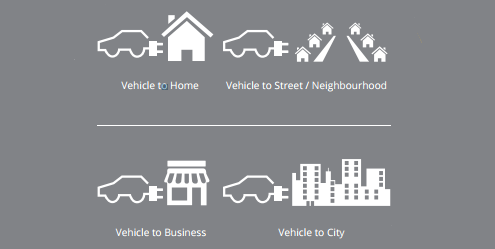 SEEV4-City stands for ‘Smart, clean Energy and Electric Vehicles 4 the City’.The SEEV4-City project is exploring how to harness Information and Communication Technologies to structure the energy system in such a way that electric vehicles can be charged by locally produced renewable energy while utilising surplus energy stored in the car batteries. The project involves 7 operational, long-term pilots in 6 cities in 5 European countries.

SEEV4-City project partner Amsterdam ArenA launched on 30th November 2016 their Storage Project together with partners Nissan, EATON and The Mobility House, and is looking forward to further develop the functionality and possible services of this battery storage as part of the SEEV4-City Program.

Stay up to date with this project through the official website: <http://www.northsearegion.eu/seev4-city/>

It contains 7 operational, long term pilots in 6 cities in 5 European countries aiming for:

The mismatch between the production of renewable energy and the electricity demand by EVs forms a challenge in reducing CO2-emissions from road traffic in Amsterdam. The ability to overcome this lies in the adoption of smart charging solutions. A first step to develop these solutions is set in the current stage of the SEEV4-City pilot that is hosted in the city of Amsterdam, which considers the introduction of a static smart charging profile, which sets a time-dependent maximum charging rate.

Although these pilot projects are only in their early stages, it has clearly already begun to demonstrate the power of transnational cooperation in mitigating climate change.

While these initiatives are locally based, the partners need to work together and share best practices to achieve the project’s intended results: An increase in the number of zero-emissions kilometres driven and thereby a reduction in CO2 emissions in the areas where the pilots are being run.

All SEEV4-City Operational Pilots are aimed at combining electromobility and renewable energies. Beyond this scope, each project has its own particularities. Some of them are small and focused on households; others on districts. Some projects maximize the use of electric vehicles, meanwhile others count with stationary batteries. In addition, some are applied to living areas, and other to business buildings.

The objective is to encompass a variety of situations where electric vehicles and renewable energies interact, so it is possible to develop a more consistent set of good practices.

Project Amsterdam: (Vehicle2Neighbourhood)
The focus in this project is optimizing the interaction at district level between prosumers and EVs. The chosen area of study will have the precondition of counting with enough EV usage, having significant ownership of PV installations, and having potential grid constrains problems. Landlords will not experience any change in the way they use electricity, but their excess of production will be diverted when possible to charge EVs parked in the district. ICT implementation will forecast energy generation and consumption, so in the evening the EVs parked will provide energy back to the selected households . The results of this Operational Pilot will serve as a landmark source of knowledge to apply V2G schemes in Amsterdam, and will also serve to explore the possibilities of variable energy prices in combination with V2G.

Project Amsterdam Arena: (Vehicle2Business)
Amsterdam Arena presents a different order of magnitude for V2G experiences, with a consumption of energy comparable to a district of 270 households. Thanks to its PV installation Amsterdam Arena already produces around 10% of the energy it consumes; but has a very high power consumption in the evenings during sport events and gigs. Consequently, Amsterdam Arena is interested in energy storage and V2G applications. The vast renewable production ensures a massive supply of clean energy to charge EVs, what translates into a manyfold increase in clean kilometers for the vehicles parked. The experiences of Amsterdam Arena can serve as a development model for other stadiums worldwide.