Project by Mirjam Endendijk , Marketing & Communicatie Manager at Luminext .
Posted on May 26th 2016 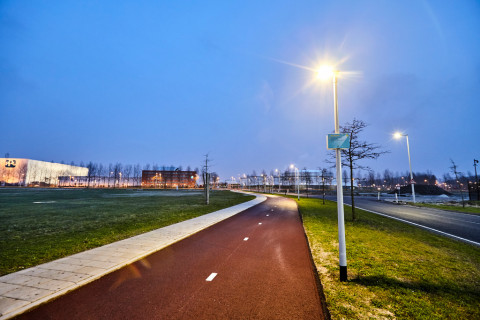 Port of Amsterdam chooses smart street lighting, a DC grid and sustainable wind and solar energy on a bike path in the area. In this way it is able to save costs and energy. On the other hand Port of Amsterdam provides light to citizens when they need it. As soon as a cyclist is nearby he can adjust the lighting by himself to a 100% with the GeoLight app on his own smartphone. During his tour he will feel save and comfortable. As soon as there is no activity the streetlights dim again automatically so energy will be saved.

The 42 dynamic, dimmable LED luminaires are controlled remotely by Luminizer software from Luminext. Together with the independent DC grid instead of the regular AC grid and energy sourced fully from nearby floating solar panels and a miniature wind turbine it makes the street lighting system sustainable and energy and cost efficient. Also citizens have a comfortable light level on the street when they need it.

The self-supporting, autonomous system is unique in the world, and the pilot project is to be gradually expanded until the entire port area is lit by this sustainable, safe and user-friendly system (red. Port of Amsterdam).

The solar panels charge a battery, with the direct-current DC grid then supplying the energy needed for the streetlights. This is energy-efficient, as there is no need for direct current (DC) to be converted into alternating current (AC) and vice versa.

The system, which was developed by Port of Amsterdam and Dutch sustainable energy company Eneco, will pay off in the long run, not in the least because there are no other energy costs involved. Since the energy is both generated and used locally, there is no need to install pipes and cables from the main power grid to the public area to be illuminated. Also eliminated are the need for converters, and DC cables are thinner than AC cables – all of which saves money on raw materials and investments. Amsterdam is the first city in the world to implement this type of self-supporting system, which is powered by the high-voltage DC grid and therefore does not rely on the public AC grid.

Hi, I am from México and I'm looking into smart cities and projects that we can implement in our community, I would be very grateful If you could answer some questions about the implementation of this project.
You can contact me: a01176655@itesm.mx
Thank you

Hi there!
We are a group of students from Lund University (Sweden), studying our Master in Information Systems. In one of our courses, we are doing a research about sustainable/smart cities in Europe and after reading about Amsterdam, the choice of city became easy!

By looking at this project, we see that you would fit very well in an interview about the smart city initiatives in Amsterdam from an entreprenoural point of view. We would be very grateful if you took your time to help us out answering our questions, which will take around 45 min - 1 hour.

If you would like a copy of our report when it is finished, we’ll gladly share it with you!

Please contact me and I will explain more: fredriksson.otto@gmail.com

Beyond tha bike path, did the project expanded until the entire port area now?

When did the project start at the port;2015?