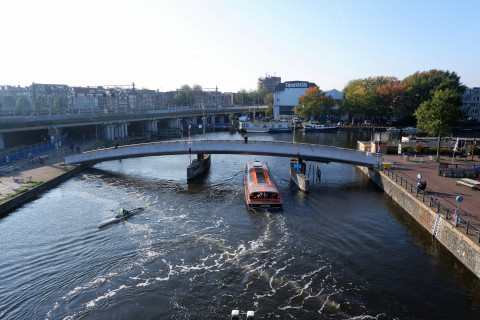 Every year, more than 8 million tons of plastic pollution ends up in our oceans of which 60-80% originates from rivers. Plastic does not biodegrade and causes great harm to the environment. Marine life gets entangled in plastics, vessels get damaged and microplastics form a health hazard for the smallest to the largest organisms. The Great Bubble Barrier has developed a technology which can intercept plastic pollution in rivers before it reaches the ocean: the Bubble Barrier, a bubble curtain with a catchment system.

The first long-term Bubble Barrier in the world was placed in November 2019 at Westerdok in Amsterdam.

THE BUBBLE BARRIER SYSTEM: HOW DOES IT WORK?
The bubble curtain is created by pumping air through a perforated tube on the bottom of the waterway. We make use of the natural flow of the river. The plastic waste will be directed to the side and into our catchment system at the riverbank, where it will be retained and removed from the water.

The Great Bubble Barrier's mission is to fight plastic pollution in rivers by:

The first long-term Bubble Barrier in the world was placed in Amsterdam. It is fully operational and intercepting waste from the Amsterdam canals as we speak. At the location, there are daily curious (local) visitors passing by. The Bubble Barrier provides insight in waste in rivers and serves as a means to inform and to educate about the problems of plastic pollution.

The Great Bubble Barrier was founded in 2017, by Anne Marieke Eveleens, Saskia Studer, Philip Ehrhorn and Francis Zoet. The idea won the first prize in the Postcode Loterij Green Challenge in 2018 and in the Plastic Free Rivers Makathon organized by Rijkswaterstaat and PWN. Other partners are amongst other: Waterschap Amstel, Gooi and Vecht, Deltares, BAM/vd Herik, Gemeente Amsterdam, and Plastic Soup Foundation.

Currently, the focus lies on Europe. Eventually, the goal is to place as many Bubble Barriers as we can in the most polluted parts of the world, such as in Asia.

Commissioning the first Bubble Barrier in the world made the city of Amsterdam is a global pioneer in the fight against plastic pollution.

Bravo! It's one of those ideas where you wish you would have thought of that. I am standing on my desk applauding you loudly! Well done! Fantastic!

Hi Guys, I think this is a Great idea, well done!