A Danish supermarket is going to act against food waste 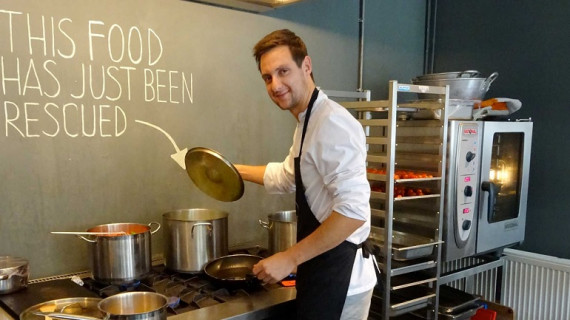 In Copenhagen, the capital of Denmark a supermarket has opened up that is going to act against food waste

They will do this with shelves full of food that is (almost) expired, has damaged packaging or a wrong label. There’s something ‘wrong’ with the products, but you can still eat the food. The whole store is run by volunteers and the profit will go to a charity.

The supermarket started with money from crowdfunding. Wefood wants to stand up against food waste, because each year 700.000 ton is thrown away in Denmark. “What a waste”, says the Danish Minister of Food and Environment Eva Kjer Hansen. According to her this initiative helps in the battle against waste, and that’s not the only thing. The store also wants to help Danish people that don’t have a lot of money to spend, as prices are a lot lower in the supermarket. According to their site you pay 30 to 50 percent less than in the regular Danish supermarkets. If this first store is a success, the organization wants to open more shops in the country.

In the Netherlands there also exist a few initiatives to counteract food waste. In Amsterdam there’s a restaurant called InStock that uses rejected food from supermarkets like Albert Heijn. According to InStock-funder Freke van Nimwegen the restaurant is doing so well that they are looking to expand. ‘’We notice that it used to be a small group that was occupied with combatting food waste, but that group continues to grow. That’s why we started a product line with jam, chutney and pickles made of vegetables and fruits that weren’t sold.’’ Wageningen University already does something similarwith supermarket Plus and caterer Hutten. They have a deal in which the caterer gets all the left over vegetables for soup and sauces.