A specter is haunting Europe — the specter of Smart City 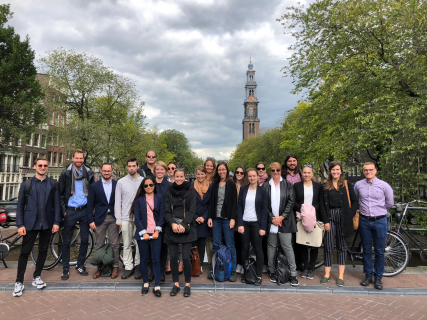 On a typical autumn day at the beginning of September, about 20 students from Switzerland met in a bright, old-fashioned coffee house. Only a few steps away from Amsterdam Zoo. This closeness to the zoo certainly has a symbolic dimension. Because on this day, the group is trying to trace an exotic-sounding organism. The Smart City Amsterdam.

At this first meeting in the city on the shores of the river Amsel, a short briefing was held on the forthcoming mission. It quickly became clear that if the group wanted to learn something about this Smart City Amsterdam, first the ecosystem in which this idea occured had to be studied in depth.

As soon as all had their wake-up coffee, the group went to the centre of the city, where the students had arranged to meet someone who might be able to help them analyse the Amsterdam ecosystem.

Once there at the Dam Square, the temporary city researchers were immediately greeted warmly by Leonie, who invited the group on a city tour. The tour with a focus on the historical and social conditions that shaped the city, started directly in front of the National Monument, that was built to keep in memory the suffering during WW2.

The students learnt a lot about the role of the Netherlands during the time of war and especially about the probably unparalleled economic rise of this legendary trading city in the 17th century. Additionally, interesting background information ranging from business and architecture to local traditions and cuisine were given to the group.

With each new insight, the understanding of the conditions under which this Smart City seems to thrive grew. The sophisticated art with which the city tames the water suggests that there must be a very innovative climate in this urban area.

The peculiarity that everyone in this city can look into each others home and that very liberal and open minded image that is being cultivated suggest that cooperation and participation seems to be welcomed by the residents. And last but not least, a look at the traditional menu reveals real pragmatism in action.

Shortly before the tour was over, a phone rang. Someone supposedly spotted the Smart City Amsterdam near the harbour. For everyone it was immediately clear: Now or never. The measuring instruments were quickly calibrated and the meshes in the net were checked one last time. There was no time to lose.

On a former harbour area, very close to the shipping museum, the group finally found what they were looking for. After a short wandering on the winding terrain, the Smart City Amsterdam revealed itself to the students in the shape of an open door.

As the curious group members stepped through the door, they were warmly greeted by Cornelia. Cornelia works for the organisation Smart City Amsterdam, an organisation which acts kind like the brain of the hole Smart City by connecting the different parts of the organism.

In the following hour and a half Cornelia explained to the students what the Smart City Amsterdam is or rather what it is about to become.

The term Smart City probably has more definitions than there are cities that want to become smart.

However, as the lowest common denominator, it can be said that Smart City is an answer to the increasingly complex challenges faced by large cities today. After all, more than 50% of the world’s population lives in cities – and according to the United Nations this trend continues to rise.

Where many people come together, traffic problems are usually not far. The danger of accelerating climate change, on the other hand, calls for a rapid rethinking of the way we use our resources in general – especially in terms of energy supply.

And last but not least, large cities are struggling with the atomisation of society and the increasing alienation of the population from the public institutions. Smart City is intended to be a solution to at least one of these challenges – but usually for several at the same time.

On the one hand, the technologies available today are to be used for sustainable urban development and, at the same time, the collective intelligence of the urban population, businesses, science and government agencies is to be transformed into innovative solutions via collaborative processes.

However, different Smart City approaches are used around Europe. So also Amsterdam has its own idea, what a Smart City is about.

For Amsterdam, Smart City means being economically strong and sustainable at the same time. The programme focuses on the four themes (1) energy, (2) digital city, (3) circular city and (4) mobility.

To make progress in these areas, Amsterdam has designed its Smart Governance around a specially founded organisation which acts as kind of a Network Administrative Organisation (NAO). It coordinates the various activities of the actors involved, helps with networking and thus promotes collaboration within the network.

The two essential spheres of Smart City Amsterdam are: The Public Private Partnerships and the Smart City Platform.

The platform in turn is intended for the entire Smart City community. This platform should enable collaboration and participation of as many stakeholders as possible. So far, almost 7,000 people have registered. On the platform projects can be presented, event suggestions can be posted and discussions about the desirable further development of Smart City Amsterdam are held.

Fortunately, the interested listeners were able to ask questions at any time and so the students more and more managed to understand this new and special Smart City phenomenon. It was without a doubt a very enlightening encounter and a successful prelude to further research on Smart City Amsterdam.

The students visited Amsterdam as part of the master's programme "Business Administration - Major Public and Nonprofit Management" at the Zurich University of Applied Sciences (ZHAW SML).

Hi Kevin, thank you for your great recap! Glad to hear you had a nice time at Amsterdam Smart City with @cornelia