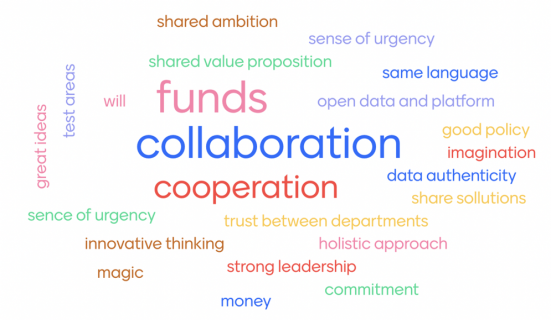 On June 21, under the flag of RVO’s 100 Climate Neutral Cities Mission, Amsterdam Smart City hosted the 200 Intelligent & Climate Neutral Cities Jam, bringing together stakeholders of the 100 Intelligent Cities Challenge (ICC) and 100 Climate-Neutral Mission, to create synergies between these two initiatives and help amplify their impact. In this post we provide a short recap of the session.

To kick-off the session, participants were asked to reflect on what will it take to achieve the so-called “twin” green and digital transitions. Some of the key ingredients indicated by the participants were: strong leadership, sense of urgency, good policy, collaboration, innovative thinking, shared ambition, funds and imagination.

After that ASC program director Leonie van den Beuken introduced the work of Amsterdam Smart City, which started in 2009 with a focus on engaging citizens and entrepreneurs in small-scale projects that could accelerate the energy transition through digital and social innovations. Reflecting on the situation 12 years later, Leonie noted the work is far from finished: “The world is in transition and people often say everything is changing too fast. But the opposite is true; we are not changing fast enough”.

Next, Dana Eleftheriadou, European Commissions’ Head of Advanced Technologies and Digital Transformation provided an introduction to the Intelligent Cities Challenge – a programme launched in 2020 that is helping more than 100 small and medium European cities on their way to sustainable growth through the use of digital technologies. The programme is delivering tailored strategies and boosting capacity of municipal authorities and their innovation ecosystems on five themes: citizen participation & digitalization of public administration, green economy & local green deals, upskilling & reskilling, green & digital transition in tourism, and supply chains, logistics and the economics of mobility.

The following pitch came from Harry Tuinder, representative of the Directorate General for Research and Innovation at the European Commission, who introduced the Climate Neutral Cities Mission which aims to achieve at least 100 climate-neutral European cities by 2030, and ensure that all European cities build the right foundation to become climate-neutral by 2050. The programme will be one of five missions inspired by the Apollo 11 programme that sent the first man on the moon. The idea is to create bold yet realistic targets to address key societal challenges by inspiring bottom-up innovation and solutions. The mission is expected to be published in October 2021.

The session wrapped up with short contributions by Christiaan Norde, Policy Advisor International Affairs at the City of Amsterdam and Jacobine de Zwaan, Smart City Advisor at Ministry of External Affairs, who reflected on the role of learning in city networks and public-private collaboration to achieve climate-neutral and smart cities.

The Intelligent Cities Challenge and Climate Neutral Cities Mission are inspiring examples of how the European Commission is mobilizing resources to accelerate the twin green and digital transitions. As Mariana Mazzucato, special adviser on research and innovation for the Commission points out, the collaborative, mission-oriented thinking resulted in putting a man on the moon. We can use the same approach to solve our most “wicked” problems – including climate change – closer to home and improving the lives of all Europeans.

Check out the recording of the event below.

Amsterdam Smart City congratulates Haarlem with this prestigious award of the European Commission.

And the winner of the Rising Innovative City 2022 is: the city of HAARLEM in the Netherlands. Congrats on this great achievement to make Haarlem and the Amsterdam Metropolitan Region an even more liveable place for the people who live, work and play.

Let this award be a further stimulation of great things to happen to improve the quality of life of citizens and make Haarlem a digital and social inclusive society. #EICSummit22

Amsterdam Smart hope to welcome you (back) as a valued partner in our ecosystem!

The webinar "Digital ecosystem for the New European Bauhaus (NEB)" aims to showcase how digiNEB.eu can contribute to the NEB ecosystem by adding digital solutions and tools.

For more information and to register visit: https://digineb.eu/events/webinar-digital-ecosystem-new-european-bauhaus-neb