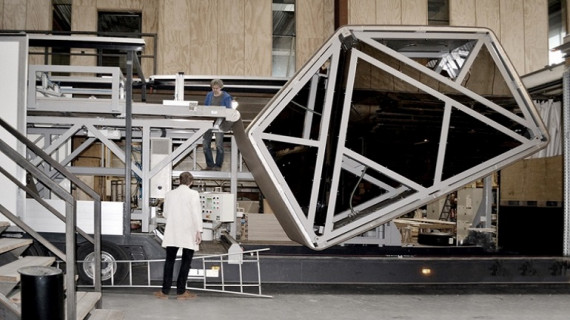 If you walk around FabCity Campus somewhere in April, among other things you can gaze at cardboard houses. But you won’t be able to blow them away, since these buildings, manufactured by Fiction Factory, are wind- and waterproof and will last al least a quarter of a century. Rick Buchter is co-designer of the Wikkelhuis (a ‘wrapped’ house), developed to address the changing needs in contemporary housing. The Wikkelhuis is sustainable, relatively cheap and adaptable.

Physical examples of the Wikkelhuis can be seen at the FabCity Campus, Buchter tells. ‘In one of them starting enterpreneurs of the Hogeschool of Amsterdam will settle and the second Wikkelhuis will be used for testing new kinds of façades, designed by students.’

The Fiction Factory will also relocate the production of Wikkelhuis-modules to the Head of Java-island, for the duration of FabCity Campus. That won’t be too complicated, as the machine which produces the cardboard elements, is attached to a truck which they acquired from René Snel, the original inventor. Buchter explains the process: ‘From a kind of giant toilet-roll, the cardboard is wrapped around an enormous cast. There are 24 layers; each of them is glued to the next. After that we cover the module in a ‘raincoat’ to make it wind- and waterproof.’ The whole process cumulates in one module – the average Wikkelhuis is made out of six of those. ‘The buildings will last at least 25 years’, Buchter states. ‘Then it’s time to change the ‘raincoat’. You can also add or take away modules, depending on your demands in housing.’

Buchter is excited about the project. ‘It is wonderful to work with an innovation that really ads something to the existing way of building. We see that concrete buildings are already demolished after twenty years, a terrible waste. A Wikkelhuis is a good alternative.’
In the Netherlands you can find, apart from the FabCity Campus, three cardboard houses: at Schiphol Airport, on campsite de Lievelinge in De Betuwe and in north Amsterdam on the premises of the Fiction Factory. If you want to observe the manufacturing process, you can come to the FabCity Campus, from mid-April onwards. Buchter: ‘We are looking forward to talking with people about building and housing in the future. And to exchanging knowledge and experiences with the other participants.’