From European Capital of Innovation to WeMakeThe.City! 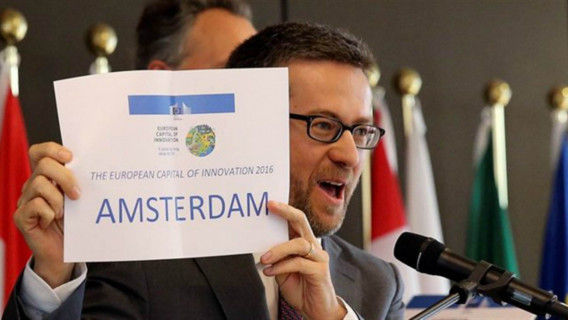 In only two and half weeks the urban festival WeMakeThe.City will start again. For a week, the Amsterdam Metropolitan Area will revolve around urban challenges and their solutions. We will celebrate that WE make the city all together. WeMakeThe.City arose from the iCapital prize and the former Smart City event. What is the story behind all this?

On 8 april 2016, Amsterdam was awarded the title of European Capital of Innovation (iCapital). The European commission praised Amsterdam for its holistic approach on innovation with a focus on governance, economics, social inclusion and the quality of life. Amsterdam won €950,000 and decided to use the money to support bottom-up initiatives, in the incubator Amsterdammers, Maak je Stad! This process gave all partners a lot of energy, something they wanted to retain.

At the same time, Amsterdam felt there was a need to reform the annual Smart City event in the Amsterdam ArenA. In contrary to many other smart city events worldwide, Amsterdam Smart City wanted the event to be for the people of the city, not only business-to-business.

The two ideas came together and Pakhuis de Zwijger took the initiative to make a program for a new urban festival.

The initiators of this festival, which was later called WeMakeThe.City, were the City of Amsterdam, Pakhuis de Zwijger, Waag, AMS Insitute, the Amsterdam Economic Board and Amsterdam Smart City. In 2018, the first edition took place and this was a big success.

So for the second time, there is a week full of high-profile conferences, inspiring meet-ups, mind-breaking hackathons, amazing exhibitions and more ahead of us. We invite everyone to make cities more liveable, sustainable, just, climate proof, accessible and safe! Check wemakethe.city for the full program.

Amsterdam Smart City is involved in the following events:

Amsterdam City Challenge – a 24 hours pressure cooker for Urban mobility and Sustainable Energy. Will you join the challenge?

Our recommendations for the week:

Especially for non-Dutchies: our recommendations for the WeMakeThe.City festival - Amsterdam Smart City