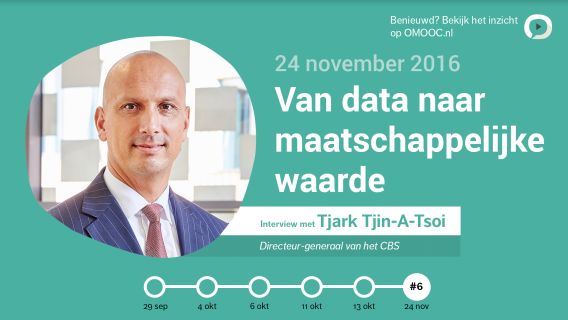 An interview with Tjark Tjin-A-Tsoi, Director General of the CBS.

Mark Frequin, Director-General Accessibility of the Ministry of Infrastructure and Environment interviews Tjark Tjin-A-Tsoi, Director General of the Central Bureau of Statistics on the theme "From data to social values." A discussion about the current and target position of the CBS, interpreting data, the impact of innovation on the work of CBS and personal look of Tjark Tjin-A-Tsoi on innovation in government.

CBS was elected in 2015 to Best Government Organization of the Year and praised for the fact that it is independent and a high-tech new organization responds to current events, the demands and needs of citizens, businesses and other governments.

You can now view the sixth insight of the MOOC Urban Innovation by Technology: http://omooc.nl/inzicht/van-data-naar-maatschappelijke-waarde/