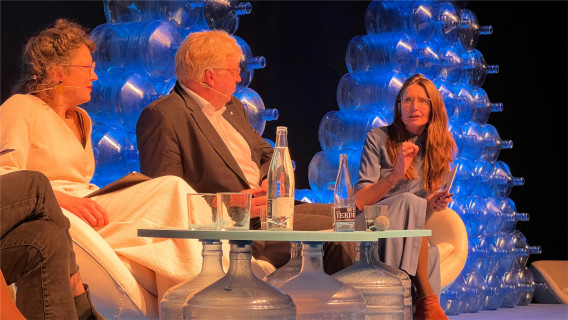 The Amsterdam Smart City team is back in the Netherlands after an inspiring week at the Smart City Expo in Barcelona. The yearly Smart City Expo is the place where companies, entrepreneurs, start-ups, cities, and research institutions in the field of climate neutrality and smart cities meet. By promoting social innovation and identifying collaboration opportunities, the event is dedicated to creating a better future for cities and their citizens.

For the past months, we collaborated on a broad programme together with various Amsterdam Smart City partners. Curious to what we’ve been up in Barcelona? Read our recap below

We then visited the Superblocks, which sparked a childlike enthusiasm in many of us. Within the city, ‘islands’ of nine blocks are appointed as so-called Superblocks. Within these Superblocks, urban developers experiment with measures to reduce the presence of cars and create a greener, more liveable space for citizens. We saw first-hand how former intersections were transformed into squares, gardens, and meeting places for the local community. During the tour, we discussed the challenges in scaling the Superblocks concept across the city, and how Barcelona is inspiring other cities to limit car-access and car-dependency through similar initiatives.

Intelligent Cities Challenge (ICC): Mayors Forum & Panel Discussion
Over the past 2.5 years, the Intelligent Cities Challenge (ICC) of the European Commission (EC) brought together 136 cities in a peer network focused on supporting and accelerating the twin green and digital transition. The Amsterdam Region, represented by Amsterdam Economic Board and Amsterdam Smart City (ASC) participated in the Challenge as one of the mentor regions, sharing experiences and best practices throughout the ICC journey.

A two-day conference coinciding with the World Smart City Expo brought the current phase of the ICC to a close. The first day was dedicated to a Mayors’ Forum, a gathering of over 40 European mayors, vice-mayors, political representatives, and city leaders. Marja Ruigrok, vice-mayor of the city of Haarlemmermeer, represented Amsterdam Metropolitan Region and shared experiences related to Green Deals, a cornerstone of the ICC.

During the second day, Cornelia Dinca, Amsterdam Smart City International Liaison, and coordinator of Amsterdam Region’s participation in the ICC, contributed to a panel on the Transition to the Green Economy, sharing the Amsterdam Smart City approach to building innovation ecosystems and facilitating multi-stakeholder collaboration on key societal transitions. Full reports from the two-day conference are available via the ICC website.

Incoming & Outgoing Missions from Dutch Pavilion
Amsterdam Smart City hosted several incoming and outgoing missions from the Dutch Pavilion in collaboration with the Netherlands Enterprise Agency (RVO). The purpose of these missions was to provide Dutch delegates opportunities to connect with international colleagues, facilitating knowledge exchange, collaboration and trade. The programme consisted of guided visits to the Microsoft, EIT Urban Mobility, and the European Commission pavilions, and the chance to meet with international colleagues from the Canadian, Australian, German and Finish delegations.

Leonie in panel discussion at Congress
On Wednesday, Leonie was part of a panel discussion about ‘Designing the City from the Bottom-up’. Leonie spoke about how we’re moving away from top-down urban design principles and aim for cities inspired by people. The peoples’ will to have a say in the design of their environment is already there, it’s up to policy makers and urban planners to facilitate this participation in the best way possible.

Leonie emphasized that we need to execute radical changes to keep our cities and planet liveable. Implementing topics like new mobility systems and renewable energy will have a huge impact on how we design cities. “We need the wisdom and creativity of the crowd to do well. As the city is not only for citizens, but from them”.

We want to thank all co-organizing partners for a great week in Barcelona! If you have any questions about the programme of this year, or 2023, don’t hesitate to reach out to our Community Manager Sophie via sophie@amsterdamsmartcity.com. And we hope to see you in Barcelona next year!

Are you an Amsterdam-based entrepreneur, or do you work for an SME? And do you want to make your company more sustainable? Then draw up a proposal for an Impact Deal before 24 February and receive support from the City of Amsterdam.

What is an Impact Deal?

The City of Amsterdam (Amsterdam Impact) is looking for 10 Amsterdam companies that want to take concrete steps in 2023 towards becoming more sustainable or increasing their social impact.

In an Impact Deal, the entrepreneur and the municipality agree to increase that company's impact by, for example, reducing CO2 emissions by 30 per cent or hiring five job seekers at a distance from the labour market.

The deal must be as concrete as possible, and the entrepreneur should define goals, activities and outcomes. The municipality provides support by offering access to its network and consultations on topics such as financing and access to European funds.

Who is behind the Impact Deals project?

Amsterdam Impact and MKB Amsterdam are the initiators of Impact Deals. The project is part of Local Green Deals, created by the European Commission's Intelligent Cities Challenge.

Want to learn more and submit your Impact Deal proposal?

Visit the Impact Deals page (in Dutch) on the website of the City of Amsterdam.

City governments can have grand ideas and dreams about changing a city and revolutionizing services, but without a clear design and focus on building a base, many ideas and innovations can fall through. Amsterdam Smart City’s Programme Director, Leonie van den Beuken, was invited to speak about how to design a city from the bottom-up at the Smart City Expo World Congress in Barcelona.

Ralf Kleindiek, Chief Digital Officer and State Secretary for Digital Affairs and Administrative Modernization for the City of Berlin, and Caroline Paulick-Thiel, Executive Director for Politics of Tomorrow and the Co-Founder of nextlearning, joined her in this discussion.

Leonie highlighted that it is crucial to include residents in decision-making processes, but at the same time, we need to address how difficult the process and outcome may be. For example, if we want streets with less cars, residents need to give up their cars and find other alternatives. Key to designing the city from the bottom-up is to ask the right questions in an understandable and tangible way.

Watch the full interview and other interesting talks via the website Tomorrow. City: https://tomorrow.city/a/berlin-and-amsterdam-or-designing-the-city-from-the-bottom-up