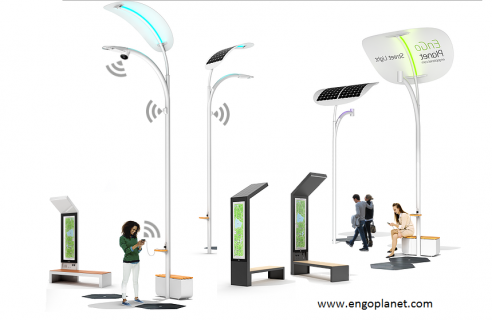 In today’s increasingly global and interconnected world, over half of the world’s population (54 per cent) lives in urban areas although there is still substantial variability in the levels of urbanization across countries. The coming decades will bring further profound changes to the size and spatial distribution of the global population. The continuing urbanization and overall growth of the world’s population is projected to add 2.5 billion people to the urban population by 2050, with nearly 90 per cent of the increase concentrated in Asia and Africa. At the same time, the proportion of the world’s population living in urban areas is expected to increase, reaching 66 per cent by 2050. The main reason that drive such rapid growth in demand for smart solar street lights is the need that cities become more energy resilient and less dependent on power grid. Hurricane Sandy clearly showed that even the wealthiest cities in the world such as New York do not have proper infrastructure in place to provide essential services such as public street lighting when unexpected events occur.

The leader in Smart Solar Street lighting industry New York based company EnGoPlanet aim to completely transform how cities light up their streets. EnGoPlanet has several different models and so far, they have installations in Las Vegas, Philadelphia, Oman and Kuwait. In addition, currently they are developing new smart solar street light model that will be completely different than any other street light on the market.

Many cities across the globe are looking for new urban solutions that will help them to make their communities"smarter" and more people friendly. By doing so they also want to make their cities more energy resilient and to deploy technologies that will not solely depend on the power grid.

Amsterdam Smart City congratulates Haarlem with this prestigious award of the European Commission.

And the winner of the Rising Innovative City 2022 is: the city of HAARLEM in the Netherlands. Congrats on this great achievement to make Haarlem and the Amsterdam Metropolitan Region an even more liveable place for the people who live, work and play.

Let this award be a further stimulation of great things to happen to improve the quality of life of citizens and make Haarlem a digital and social inclusive society. #EICSummit22

Amsterdam Smart hope to welcome you (back) as a valued partner in our ecosystem!

The webinar "Digital ecosystem for the New European Bauhaus (NEB)" aims to showcase how digiNEB.eu can contribute to the NEB ecosystem by adding digital solutions and tools.

For more information and to register visit: https://digineb.eu/events/webinar-digital-ecosystem-new-european-bauhaus-neb