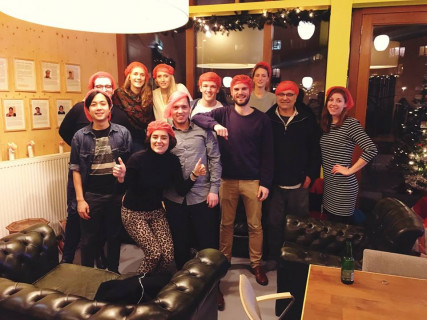 The number of smart projects in Amsterdam is growing bigger and bigger! That is an improvement and that is why we will pay a little more attention to a smart project every two weeks. This time Mara visited Buurtbuik..

In the restaurant ‘Eerste klas’ on Amsterdam Central Station I met Roel en Joni from the initiative Buurtbuik. It’s an initiative that I think can be an example for others. It has expanded greatly the last year and has successfully collaborated with companies, the municipal government, other initiatives and residents. Besides, Buurbuik tackles 3 different challenges with one project.

They help supermarkets and restaurants get rid of their leftover food, the provide meals for residents that have less to spend and they organize joint diners for residents to get to know each other. In this way they prevent food waste and hunger and decrease the number of residents in social isolation.

Buurtbuik has started one year ago and has grown to an initiative with many volunteers that provide 500 meals in three city districts weakly. The food is prepared together with the residents of the neighbourhood. You can eat the meal at the spot, usually a community centre or a comparable place, or you can take one or several meals with you.

To get the ingredients for the meals Buurtbuik cooperates with different companies. Many initiatives struggle in starting cooperation’s like these, but Buurtbuik is very successful. This is presumably because Buurtbuik clearly shows the companies how they bring supply and demand together. Supply is in this case the enormous amount of food that is wasted daily en the demand the the amount of people that don’t have enough money to spend on food. As long as both problems aren’t solved Buurtbuik has a challenge.

A big challenge for Buurtbuik is logistics. How can they get the food from the supermarkets and restaurants to the neighbourhoods? Do you have a solution for Buurtbuiks logistics? Please let us know!

By: Mara de Pater with help of Roel and Joni of Buurtbuik