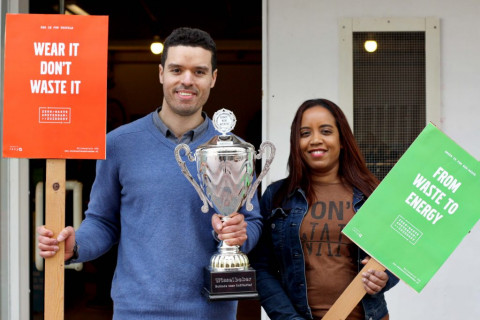 The Smart City Expo World Congress in Barcelona is getting closer! Next week the Holland Pavilion will be filled with Dutch companies. One of them is the start-up RecyQ, working on the circular economy. We talked to Richard Severin.

Richard: ‘RecyQ makes more from waste by combining the hyperlocal bottom-up approach with technological possibilities. Our business is to get people to become more of waste problems and show them that waste separation is very useful. Together with our partners, amongst others the City of Amsterdam, we set up a zero waste platform for people in Amsterdam to separate waste more easily. People can separate paper, plastics, glass and textiles in our store or in containers. We measure the amount and in exchange people get a crypto token with which they can buy stuff in local stores. Besides that, we show people through our app how much CO2 they saved. We do not only make sure there is less waste, we also transform waste into new products. For local communities, we are closing the loop of raw materials.’

How do residents react?

‘The responses we get from citizens are very positive. People see the future of sustainability happening in their neighbourhoods. We show people how to contribute to a better world and tackle climate change hands on. It makes the circular economy more visible to residents. Of course, not everybody is willing to join us, but we focus on the people who are open to our ideas and care about the planet we leave behind to our children. They will tell their neighbours about it. This way we get a lot of positive attention! And of course it helps that people get a reward for separating waste, especially for those in a less fortune financial position.’

Do you have any plans to scale up?

‘Yes, it is very important to show other countries and cities the value case for combining waste separation and reusing materials with smart city technology! We were asked by a few parties to investigate whether our waste management and recycling project could work in the rest of the world as well. We already presented in New York City and at the Asian Development Bank. We are thinking of setting up feasibility studies for other cities. Then cities can choose which parts of our zero waste menu they want to take into development. In the Netherlands we already did such a study for Amsterdam Zuidoost, resulting in the venture Zero Waste Zuidoost and there are some opportunities in other Dutch cities. These are the bigger urban cities in the Netherlands because in the smaller areas the waste and recycling problem is not as big. The Netherlands ranks top 5 in Europe when it comes to waste separation, but bigger cities are not doing so well. Scaling up for us is also part of the reason why we are going to Barcelona!’

Want to meet Richard Severin in Barcelona? Join us at the Holland Pavilion in Hall 2!