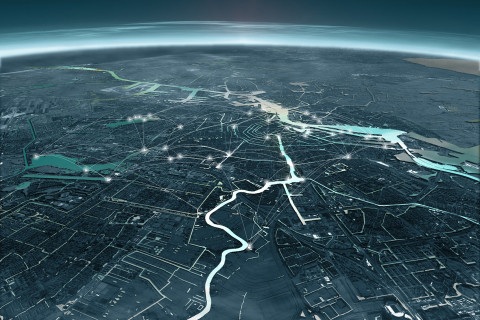 Amsterdecks is an urban network of water quality monitoring decks that provides access and information about water in Amsterdam.

Amsterdecks seeks to involve citizens in the improvement of water- and spatial quality of the urban waterfront in Amsterdam. The combination of an online information system and a public space is conceptualized as an urban commons: where citizens collectively use and monitor the quality of the water. Amsterdam is the logical starting point for a project that could ultimately be implemented in waterfront cities around the world.

The project has been briefly delayed. But is now back on track. Our team is currently seeking to make sure implementation can be achieved in Q2/Q3 of 2017.
The first result will be a pilot deck in the Nieuwe Meer in Amsterdam. This mobile deck can also occasionally moved to other places in town that are seeking to further develop their waterfront but are still developing their plans.
Ultimately, the ambition of Amsterdecks is the structural transformation of the Amsterdam waterfront from a boundary between land and water to an open public space where citizens engage in the improvement of water: a liquid commons.

Rademacher de Vries Architects initiated the project and has been collaborating with Waternet, the Waag Society and the City of Amsterdam for over a year.

After launching our first deck we want to expand the network in Amsterdam and other cities.

Communicating scientific knowledge about water-quality is complex. Oversimplifying it is risky and the raw data is indecipherable for laymen and even single experts. We're seeking to find the right balance of information for the right purpose. We have chosen swimming because it demands a high standard of water-quality that also covers many other uses, but is also accessible and fun.
This combination of accessible scientific data and a physical public space is the heart of the mechanism and could be applied to other projects and other themes.

HI Christopher, how are you doing with the implementation? Hope all goes well, very cool project!

Great.. That sounds good. If all goes well it might be built by then. Let's keep in touch. Are you from Amsterdam Smart City? I've been in contact with Rick Vermin he has my number. I can also share more images if needed.

Hi Christopher! Awesome project! Perhaps we can showcase at the next "IoT & The City" event on Monday September 5th in the City Hall - Raadzaal Amstel 1 Amsterdam - check out the event at - https://amsterdamsmartcity.com/events/iot--the-city