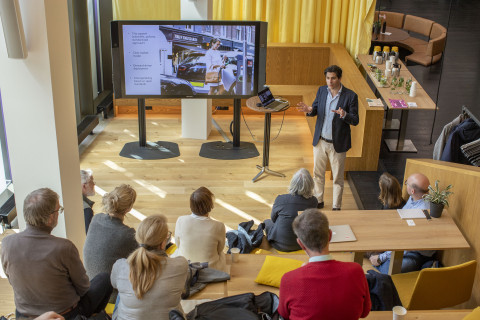 The Amsterdam Smart City (ASC) delegations program continues to grow with 45 groups hosted during the first half of 2019.

Keeping in line with the ASC philosophy of sharing experiences in order to facilitate learning and knowledge transfer, delegates were asked to reflect on and share their thoughts after their visits. They shared their most important take-aways, asked questions on topics that they would like to address further, and presented opportunities for follow-up.

1. Amsterdam is an example of an inclusive smart city. Many delegations find the ASC approach innovative in the way it brings together representatives from governments, companies, knowledge institutions, civil society and interested citizens. Whereas many other smart city programs are defined almost exclusively by governments and a few large corporations, in Amsterdam many other parties get a seat at the table.

“What is most impressive about the ASC program is that no single party has control and that many, different parties are working together.” — Japanese Delegate

“It’s interesting to see the (NEMO) science museum is a core smart city program partner. It shows that we in South Korea need to think more broadly about who we involve in smart city projects, especially as local and national governments look for ways to engage citizens.” — South Korean Delegate

2. Technology is neither necessary nor sufficient. Some delegations were interested in high-tech projects such as Vehicle2Grid or the Roboat. Still, most delegates noted they were pleasantly surprised to learn that low-tech projects focused on social innovation are also included in the Amsterdam Smart City community platform.

“Helsinki and other Finish cities can benefit from the use of a community platform to support open innovation and strengthen our innovation ecosystem.” — Finish Delegate

4. Working closely but operating independently of (city) government is unorthodox but, effective. From a governance perspective, many delegates are inspired by the approach to running the Amsterdam Smart City program in collaboration with but independent from the City of Amsterdam. For some delegates this approach seemed unorthodox as they believed the government should lead smart city programs. Others noted the approach could help depoliticize smart city projects and help build trust between public and private stakeholders and citizens.

6. More work is needed to evaluate projects. Many visiting delegations wanted to know if Amsterdam Smart City uses a specific methodology to evaluate projects, capture lessons learned, and define success. While many delegations are inspired by the approach, which makes it possible for any party in the ecosystem to share their project on the platform, some delegates felt uncomfortable with the idea that there is no complete overview of smart city projects carried out by the city and that projects are often run without clear KPI’s.

A Sampling of Experiences

This delegation was interested in getting an understanding of e-mobility and renewable energy developments in Amsterdam, as well as the overall management of Amsterdam Smart City. An expert meeting was cohosted with Amsterdam Electric and Arcadis who shared developments related to smart and e-mobility in Amsterdam. Delegates were particularly impressed with Amsterdam's leadership on e-mobility and reflected that they would like to see the Japanese government take similar steps to facilitate the transition to clean mobility.

This visit was part of a roadshow for Finish companies working on the energy transition. The meeting was cohosted with Alliander who shared smart energy projects such as the Vehicle2Grid and Virtual Power Plant pilots. The delegates were most impressed by how projects in Amsterdam have a social consideration and the way the ASC community platform helps built a smart city ecosystem. One participant suggested Finish cities could benefit from a similar approach. Other participants highlighted that they would be interested to showcasing their smart energy storage solutions in a living lab setting in Amsterdam or elsewhere in the Netherlands.

A group of 12 international design master students based in Barcelona visited Amsterdam during the rEVolution event. Because the students are working on a design project for an automotive company, the students booked a smart mobility expert session. Participants were impressed with Amsterdam's leadership on e-mobility but, some struggled to see how this approach could be transferred to their home cities which are dealing with serious congestion and air quality problems.

“Amsterdam’s approach to e-mobility is inspiring but in most Indian cities we don’t even have sidewalks. It’s a risk that so many cities are focusing on high-tech solutions which they often can’t afford.” — IED Student

This delegation consisted of municipal experts from Czech cities of Ostrava and Opava who are working together on RESOLVE, an EU-funded project focused on clean mobility and logistics. The delegates were surprised that the ASC program is independent of the City of Amsterdam and involves various stakeholders. The group would have liked to dive deeper into parking management, cycling planning and Intelligent Transport Solutions (ITS) used by the City of Amsterdam.

This delegation was interested in exchanging experiences on e-government and digital transformation topics. The meeting was cohosted with Amsterdam Economic Board and City of Haarlemmermeer. Delegates were most impressed by the privacy-friendly identity platform I Reveal My Attributes (IRMA) and the smart parking pilot presented by City of Haarlemmermeer. There was a fruitful discussion about the possibility for Dutch municipalities to learn from SIGI’s experience and a suggestion that a group of Dutch municipalities should visit SIGI. SIGI delegates were also impressed with Edge Olympic where the meeting took place and would like to work with Edge Technologies to make their new office more data-driven and healthy.

This public-private delegation consisted of high level representatives from France’s largest utility company (EDF) and its subsidiary Enedis who wanted to learn from Amsterdam-based innovations related to smart energy and e-mobility. The delegation was cohosted with Alliander and the City of Amsterdam who provided an overview to smart energy and smart grid developments in Amsterdam and on a regional level. The delegates were most impressed by Amsterdam's leadership on e-mobility and the hands-on experience of visiting EV-Box’s showcase of electric vehicle changing infrastructure. One of the delegates shared EDF would like to play a leadership role in transitioning Paris and other French cities to e-mobility.

The delegation was impressed with ASC's role as a convener and facilitator, and with ASC’s focus on smaller social initiatives instead of new cities and large projects, as is often the case in S Korea.

Visit by two delegates who work to stimulate open innovation between larger corporates and SME’s. Delegates were impressed with ASC’s approach to facilitating innovation by building a community platform and thought this approach could help Swedish companies innovate more openly by sharing knowledge and lessons learned, and by connecting ecosystem members to one another.

This group of business students was interested in the role of smart cities in stimulating economic development and innovation. The students wanted to know what motivates corporations to participate in public-private partnerships such as Amsterdam Smart City and shared that the main reason companies join such initiatives in France is in exchange for lower taxes.

Amsterdam Smart City hosted a full day Smart Mobility Experience for a municipal delegation from Leverkusen which included their Mayor. The delegation met with representatives from the City of Amsterdam, Royal Haskoning, BYCS and EV-Box and followed a bicycle tour. You can read the full visit report here.

This small delegation of Panasonic representatives was interested in entering the smart energy / smart home market in the Netherlands and Europe. The purpose of the visit was to connect to the right expertise and explore opportunities for collaboration. Delegates would like to follow-up about the possibility of showcasing and testing their smart energy devices in new districts and living labs.

AffaldPlus is a joint municipal waste company owned by six Danish municipalities. Company representatives and members of their Board participated in an expert session which focused on Amsterdam’s progress on circular economy. This session was cohosted with Metropole Region Amsterdam (MRA) and Metabolic. The delegates would like to bring back to their municipalities the Metabolic’s material flows analysis.

This delegation visit was organized by the Netherlands Enterprise Agency (RVO in Dutch) during the ITS European Congress in Eindhoven. The Singaporean delegation visited Amsterdam to learn about smart and e-mobility developments and opportunities for collaboration. Participating startups and governmental representatives were enthusiastic to hear about MRA’s upcoming Startup in Residence program which will focus on mobility topics and is open to international startups. The delegates reflected that they would like to learn more about Mobility as a Service (MaaS) pilots and opportunities in the Netherlands.

This delegation visit by policy makers was part of a program entitled “Data-based Local Policy Making For Sustainable Cities” and was funded by the Friedrich Naumann Foundation. The goal of the visit was to learn from best practices related to data governance for data-driven policy making. The delegation was first introduced to the Amsterdam Smart City program and to key digital initiates such as the TaDa manifesto and Cities for Digital Rights. Then the delegation met with Open State Foundation for an in-depth discussion about the way governments are opening up their data and the importance of digital transparency.

Delegation visit focused on learning from Amsterdam’s experience as a leading citizen-centric smart city. Delegates were most impressed by the ASC approach to building and facilitating an open community of innovators, and they thought the approach could be transferred to Japan.

Are you a local or international delegation interested to exchange experiences with Amsterdam Smart City? The Visits page provides an overview of programs coordinated and hosted by Amsterdam Smart City, our program partners and other community members.

Are you a local ASC expert or stakeholder interested in sharing your experience with local and international delegations? Or do you have suggestions for how we to improve the ASC delegations program? Get in touch with cornelia@amsterdamsmartcity.com or share your ideas in the comments section below.