Capture the world with data - Tech for Society recap 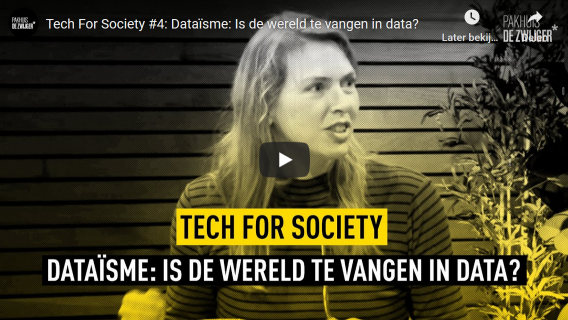 Friday 5 June 2020, the fourth edition of the Tech for Society series was launched in Pakhuis de Zwijger: a livestream series about the role of technology in a society that is currently under pressure of the Covid-19 crisis. The central theme of this edition: ‘Dataism’, defined as the believe that the world can be captured in data and algorithms. This concept makes us question its practical possibilities and how we could understand the world around us using data. How should we?

Miriam Rasch, researcher and teacher, wrote the book ‘Frictie. Ethiek in tijden van dataisme’. The book talks about dataism, which Miriam describes as a belief that everything in the world can be captured with data. It is the idea that collecting data shows you certainties and predictions about the world and this way, directs people and the society as a whole . Miriam calls it a ‘religion’, since ‘dataism could exclude other views.' Data look objective and neutral. Believers of this concept, therefore, see it as a necessity to make decision-making processes data-driven.

Martijn de Waal, researcher in the Lectorate of Play & Civic Media of the Amsterdam University of Applied Sciences, recognizes this dataism in the world. As a kind believer of dataism himself, Martijn looks at the concept as a way to organize information and shape the world around us. ‘However, the central role of collecting data now, as done by platforms such as Facebook or Amazon, is too big. It is pretended as if data are objective and truthful. But collecting data is done via platforms with all kinds of underlying values, that are not always visible.’

Which kinds of values? And are these public values? Can the data work for people?’

At the Biennale of Urbanism and Architecture in Shenzhen in China, Martijn attended the exhibition ‘Eyes of the City’, where he found three interpretations on the usage of data:

In research, the usage of data is really important. Even more when policies are based on the data obtained during these studies. However, according to Caroline Nevejan, Chief Science Officer at the City of Amsterdam, you have to be transparent about the sources you used, data that are collected, and start a discussion about which statements could be seen as true or false. In a democracy everybody has to take a part in this process, which is of extreme importance in a world full of propaganda and fake news. In one of her researches, City Rhythm, she analyses the real world and the digital world and the interaction between these two. She addresses questions such as; can we trust data and can we use data for good? How can the digital world can become a part of the physical world? An example of this is, can people who like gardening can use the help of people who don't like gardening, but do like measuring and predicting growth of plants?

Arjan Widlak, director of the Kafka brigade, researches bureaucratic dysfunctioning: ‘Bureaucracy is a great asset, it ensures that all kinds of values materialize - such as legal certainty, integrity, but often this goes the wrong way. Some organizations do the opposite of what they should do. There is indifference without a much needed check.' The Kafka Brigade wants to come to manageable knowledge and people that care about bureaucracy. What kind of system are we creating when we digitalize the government? We are caught in a system of possibilities and impossibilities, where principles of responsible IT should be defined and carried out.

How do we make sure that these principles are put into practice?

Arjan: 'For example, when you drive too fast, you will be flashed. This is done automatically, as is the determination of the fine and the envelope that will be sent to you. It seems like there are no humans involved in the process. Although we might not all understand how this system works, we have a high trust in the way it functions. You have done something wrong and result is a fine. The confidence in the operation of the system is great because it functions without people and people are unreliable. But ultimately people are involved. There is a policy behind this process and people decide what is legal and what is not. Certainly, due to affairs and scandals, it is not certain whether the confidence in these techniques is still so big. So data are not objective. These are human creatures. You cannot take the people out, then you will lose ethics and the discussion about what is wrong or right.'

Caroline: ‘Data collecting functions in the constitutional state, in the city. Collect, acquire, return data has to be done according to certain laws. You can also go to court if this is done wrong. The European Rules for Data Protection (GDPR) are essential for the protection of personal data collected by companies. Companies now say, give us more rules because this works for us. We can do better business. So business runs better in a democracy’ .

Caroline continues: “Another aspect we have to look at is how data scientists are trained. What do they learn? It is staggering to see how data science education in university only has one course on responsible innovation. In collecting data we only talk about ethics, never about the rule of law. Business is always about social entrepreneurship, never about trade unions. In education, we create data scientists who have only one side of the knowledge, but get all the power. Because we did not teach the system designers how to think about democracy, power and the inequality of power.”

Martijn: ‘Yes, people in Silicon Valley work in a one-dimensional way. But this will change. There is more and more attention for ethics because students also ask for it. They want to contribute to society.’

Arjan: 'It is interesting how this also goes for the background of civil servants. This has a major influence on how the government functions. A long time ago, as a civil servant it was common practice to know something about constitutional law. You had to understand that values get meaning to each other.' Caroline: ‘Place this standards frame to the forefront again. Democracy and privacy by design. This makes it possible to discuss the interpretation of meaning.’

What can the current timeframe learn us?

Miriam: ‘We learned the value of not using tech all day. I hope we can remember it.’

Caroline: ‘Ask more questions every day. Even if you take something for granted.’

Arjan: ‘Yes, ask more questions. We can strive for privacy by design, but what does that mean? I plea for critical citizenship.’

Martijn: ‘This time showed us a revaluation for public space and values. Public space is suddenly used a lot more. What can that look like online?’

According to Amsterdam Smart City, the discussion of this evening is exactly the discussion that needs to take place. Collecting data is very useful to work on the challenges in our cities. But we have to be aware that these data are not neutral and we have to have a discussion about the issues and if the data are necessary to help solving the issues. Can we work on public values with the data? This asks for a collaboration between the public and private sector, something we work on every day. Amsterdam Smart City always puts public value first: innovating together and transparent, using each other’s expertise, with the resident at the centre.