Coming Soon to France: Hundreds of Miles of Solar-Powered Roads 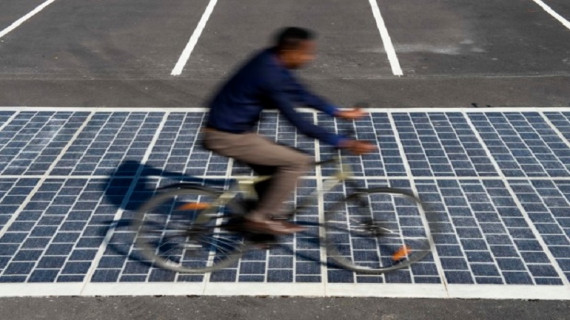 Thin panels installed on existing roads could be used to power streetlights and homes within five years.

Sooner or later the lamps glowing softly over the Champs-Élysées could be powered by the road itself.

France plans to install 1,000kilometers of solar panel roadways in the next five years, Global ConstructionReview reports. That’s anambitious goal, but not at all out of reach, because the technology is ready togo: the 7-millimeter-thick photovoltaic panel called Wattway, produced by French transportationinfrastructure firm Colas. These panels can glue onto existing road surfaces todraw power from the sun, while providing enough grip for cars and trucks todrive over them. Colas says one kilometer is enough to power public lightingfor a city of 5,000 people and 20 square meters of Wattway can power a singleFrench home.

This project joins a growing trend in urban innovation. A couple inIdaho raisedmore than $2 million todevelop their own version of smart, solar panel road surfaces (their panelsincorporate programmable LEDlights and heating elementsfor melting snow). The Dutch SolaRoad project inKrommenie, which is actually a solar-paneled bike path, generated moreelectricity than expected in its pilot phase. The U.K., taking the inverseapproach, is looking into roads that can transmit electricity to charge electric carson the move.

The French effort offers apossible advantage over other approaches: It can be installed easily on top ofexisting roads, sidestepping the costly need to build new ones. And even thoughthis technology probably won’t produce electricity more cheaply than conventionalsolar, it is a more efficient use of land.

France’s investment in this improvement will show the world how it worksat a larger scale than previous endeavors, and how the wear and tear ofreal-world driving affects the panels. If the road underneath a Wattwayinstallation needs repairs, will the panels need to be torn up? With severaldifferent versions of a similar technology now working their way into use,sustainably minded cities stand to benefit from the friendly competitiondriving down costs and differentiating the strengths and weaknesses of eachapproach. Who needs a Sun King whenyou can have Sun Roads?