Data Dilemmas: How to Get People to Use Contact Tracing Apps – event recap 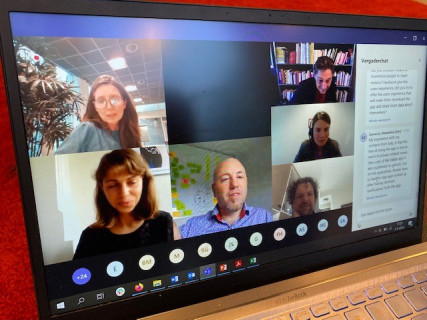 People around the globe are trying to fightCOVID-19 for months now and progress is made in developing ways to do so. While medicines and vaccines are being developed and testing facilities scaled up, we try to get a grip on the spread of the virus by doing contact-tracing. Up until now, the Netherlands have done so by tracing interactions of people who tested positive and informing them. To help determine the people who should be warned, several contact-tracing apps have been developed and introduced around the world. One more successful than the other.

What can we learn from these first trials of introducing country-wide tracing apps? What are the conditions under which people are willing to install and use them? On the 3rd of September, Amsterdam Smart City and Datalab organised an online edition of ‘Data Dilemmas’ in which an international expert panel shared their learnings while working with contact-tracing apps. One of the core values of Amsterdam Smart City is to put people in the center, a nice topic for the session.

A common theme in the success of the adoption and acceptance of the app by the public is community engagement. Both during the development stages and after the launch. This was first stated by Ivo Jansch*,* architect of the ‘Coronamelder’ for the Dutch Ministry of Health, but soon backed up by every member of the panel. Dutch, Irish and Swiss apps were developed publically through Github, where tech-savvy community members could gain insights on or even contribute to the production of the app. Although this approach laid bare all early missteps and shortcomings to the public and the press, our expert panel agreed that this was a key factor in the public acceptance of the app.

The Norwegian app Smittestopp was not successful in public adoption. The reason could be that the development of the app was put in the hands of a single company, mainly behind closed doors. The code was not made public for licensing terms, only for possible commercial interest. This created little trust in both tech experts and the population, Norwegian privacy expert and app evaluator Eivind Arvesen concluded. The app was soon removed from the app stores and cannot be used anymore.

There is, however, a thing as sharing things too early, project manager of the Irish COVID-tracker app Gar MacCríosta argued. When you are at such an early stage that there are still many options, ‘you open a door to chaos’ and the public could lose trust in the government being able to get to a good outcome. But as things moved on and the solution became more certain, the Irish became way more transparent about what they were developing.

Hilleen Smeets from the GGD Amsterdam zoomed in on the challenge of gaining outreach of the app in populations where testing is low, positive testing is high and health apps in general are not used as much. Think of poor people or overweight people. These are people do not go and test when showing symptoms. They are the ones that should be motivated to use the app, since they create the blind spot in the analogue contact tracing. Therefore, the app and the campaign should not only focus on gaining trust and understanding in general, but also pay attention to the motivators and barriers that influence app adoption in these populations specifically.

Freedom of choice was another factor in public acceptance of the contact-tracing apps. In Norway, users were not given an option to decide how much data they were willing to share. The app gathered data to control virus spreading by contact tracing, it was a way for the government to evaluate interventions and provide insights in epidemiological models and public movement. To do this, the data was stored centrally, which allowed the continuous use of data from all devices, providing both user traceability and identification. People could either agree with the app collecting data for all these purposes or not use the app at all.

Something that does not suit a government, Gar MacCríosta noted. ‘If you are trying to be open and trying to protect privacy, decentralised data storage is your only option. Otherwise you are building up contact information and social graph information, something a government cannot do. People give their datafreely to Facebook and other social networks, but in the context of a government response this is different.’ The Irish app also features a symptom tracker,news and updates about COVID-19, and the possibility for people at risk to put in their phone number for a support team. Eventually over 80% of the app users decided to do this and are therefore contactable, improving the analogue tracing system that was already in place. The digital and analogue systems of contract tracing are fully integrated. The control of users in sharing their data and providing more ‘customer services’ to these users seems to improve the adoption by the population.

Hannes Grasegger, Swiss tech journalist, added that it is important that the choice not to use the app should not have restrictive consequences in everyday life. For instance, restaurants and other public areas where people gather could only allow people when they use the app. To prevent this, a legal process has started in Switzerland. In the same light, the Swiss have decided to determine when to phase out the app, so it does not become an eternal monitor.

Check out the stream of this Data Dilemmas event!

Livestream | How to get people to use contact tracing apps

How to successfully introduce contact tracing apps? *This is the livestream of the Data Dilemmas event of September 3 2020!* In smart city projects, technology is almost never the issue. Success is highly depended on whether people will actually need, use and understand technology. This also goe