From now on… according to Marleen Stikker 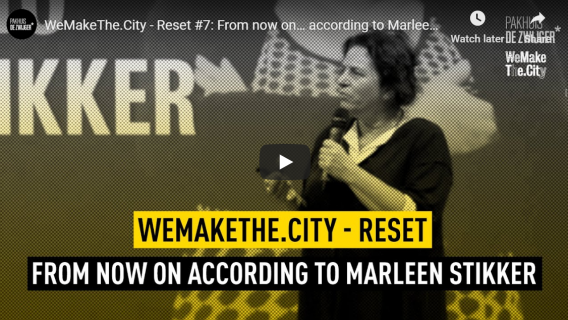 The world is turned upside down since the corona crisis. This gives us the space to think about a complete ‘reset’. How can we restructure existing dysfunctional systems? In this RESET series, Pakhuis de Zwijger will showcase the perspectives of a variety of thought leaders who will reflect on this present-day situation.

Marleen Stikker, director of Waag, is sharing her insights about the future of our digital information systems. How can we restructure existing dysfunctional systems? Together with Sander van der Waal of the Future Internet Lab at Waag, they debate how citizens should be more informed and get more involved with the ongoing digital revolution that takes place all around us. Later in the programme Bianca Wylie, Open Government advocate and co-founder of Tech Reset Canada, joins in and talks on video about her recent experience with people getting involved in Toronto’s digital development plans. The panel is chaired by Jurgen, who makes sure some very important issues are discussed.

The system is broken
Marleen states that the current system doesn’t function properly, we must come up with other systems. All kind of technology is surveilling us. There is this idea you can solve any problem with technology, that technology is the solution. But look at the Corona crisis, an app cannot solve a problem. They collect all this information and trade privacy for technology. They try to take control over our lives, to control the data. But we have to decide about our privacy. We do not need all this tracing. It is a false trade off to say, ‘I have nothing to hide’. It’s wrong to give up privacy in return for technology.

Sander van de Waal joins in and explains that people need to get involved and get back their trust in technology. For this, it’s important to inform people and specially to help members of parliament get a better understanding about all this technology behind the digital roadmap. Compare it with an iceberg: we can only see the part above the surface. But what is happening underneath the surface? There are all kinds of technology layers underneath, hardware, backdoors, data, the whole stack. It is not just the app itself but underneath is a design process. Who is working on that? What is the foundation? Where are we optimising for? How are we going to gover in? And how are fundamental rights and values part of process? This should be implemented in the design from start. Look at surveillance: it is a business case for big Silicon Valley companies. The business models are built on collecting data and invading privacy. How can we avoid that? We should have an inclusive process.

Technological Stack
Sander further explains the foundation beneath all this digital technology, the Technological Stack. With its many layers underneath the surface, this public stack has different layers that need to be understood by the public to be able to make the right decisions about data, privacy and who controls these processes.

Sander continues to explain the importance of all related data, metadata, and the use of algorithms. Who controls it? Same for the Protocols and Standards. Who decides? Next is Security. An increase in infrastructure also needs an increase in cybersecurity. The technology needs to be secure. Last is when we go again back to the surface, the part that is above the iceberg: the service itself. We should choose implementations that put the user at the centre. When we use a service, we should be able to look inside the black box. We should be able to see what goes on inside. The visible tip of the iceberg is the citizen perspective: the user experience. We can only get a grip on digitalization if we see the design as a collective responsibility. This is ourcall to action: people should be informed and be aware of the entire PUBLIC STACK.

Open standards
Marleen then replies and points at the need for people to know what is going on and get involved. It’s important that we have a debate, make sure we have technologies that people can TRUST. Even politicians not always know enough about this structure.

Marleen continues: to have informed citizens. We need to make sure the technologies we use are safe and kept to standards. We spend a lot on IT, but we need to spend it differently, set standards to vendors to abide by public standards and spend research and innovation money ONLY if the technology is Open Source. The money should be invested in open, common space. It should not be invested in patents and intellectual property, but in a common good. Using public money to build a public internet. This whole movement for the next generation internet, is part of the 21st century economics. Where you move away from extractive economic models and move towards regenerative models. It is part of a much larger, sustainable development movement.

Tech Reset Canada
An example is how Bianca Wylie, Open Government Advocate and co-founder of Tech Reset Canada, mobilised citizens to oppose plans to let Google be in control of Toronto’s Smart City plans. Marleen and Sander then continue to discuss related topics like the lack of democratic oversight, how private companies usually have a goal of maximizing profits for just their shareholders, how private companies should not control public space.

Collective Power
So, the question is: How can we develop smart cities in a democratic way? People should be aware that they DO have collective power. Marleen’s greatest fear is that people forget that they have this power. I think we are at a critical time to rebuild our institutions. You do not need to be an activist, but act as a participant, a designer, step in and take your responsibility. In helping to define the future. Take for example the NHS ‘Corona’ app, which turns out to share collected data behind everyone’s back to the new data company of PayPal founder Peter Thiel. Isn’t this a real example of how NOT to trust your own institutions? Technology needs to be handled by trusted partners within the community. It needs to be well tested. What about misuse of collected data, even in a later stage? Who is watching? And then there is the issue of function creep: what was designed for just a temporary, single purpose use can later develop into something more, other uses, or over longer time then initially intended. Who controls this?

Do you want to watch the full livestream? Visit the website of Pakhuis de Zwijger: <https://dezwijger.nl/programma/from-now-on-according-to-marleen-stikker>

The discussion of this evening is exactly the discussion that needs to take place. Amsterdam Smart City beliefs in innovating openly and transparent, with always placing people and citizens central in our approach. We do this together with partners like Waag and Pakhuis de Zwijger, who have the expertise to not only engage but co-create with citizens.

The City Lab will launch on June 14th with sessions open to the ICC community and the public. Week 1 will be dedicated to mentor led Thematic Network sessions, where the ICC Mentor Cities will present successful solutions and good practices implemented in their cities. During week 2, the Peer Reviews sessions and Transversal Network sessions on Open Data and Public Procurement will be in the limelight. The closing event is scheduled for June 23rd.

As ICC mentor, the Amsterdam Metropolitan Region will contribute to the following sessions:

Joining a session
Are you a stakeholder from the Amsterdam Metropolitan Region and would like to participate in any of the sessions dedicated to ICC community?  Please send a short email to Cornelia Dinca via cornelia@amsterdamsmartcity.com indicating which session(s) you would like to join in order to receive the relevant calendar invite(s).

For more information and the complete program please visit: https://www.intelligentcitieschallenge.eu/events/5th-icc-city-lab

Are you an architect, urban designer, planner, engineer or designer and want to know more about the challenges facing the future of Amsterdam, or want to become more familiar with the many smart city technologies, techniques and trends that are available to solve these urgent challenges?

Arcam's Architect in Residence 2022 and Future City Maker Tom van Arman invites the design community to a special a (free) 1 day only Smart City Design workshop where we will show you some key projects accelerating the Amsterdam 2030-2050 agendas.

WHY? The physical and digital worlds are becoming more and more intertwined as new markets like drone delivery, micro-grids / blockchain, digital twins and 3D printing are shaping the city sometimes faster than the authorities and architects can cope with.

WHAT? By the end of this workshop you will have had a clear look into the many systems shaping Amsterdam and what a designer like you can do to help transform our future city.