Greenery in the city 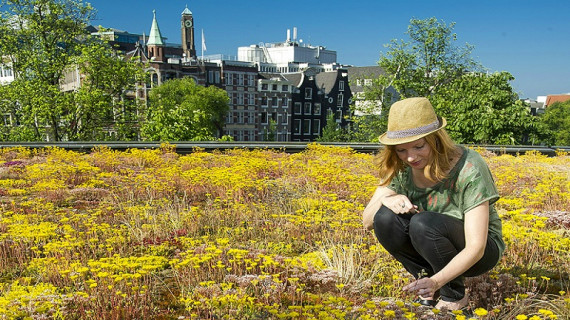 In general the temperature in cities is a few degrees higher than in rural areas. Hereby cities become so-called ‘heat islands’ in summer. This has to do with the fact that heat is stuck between the many buildings in a city. City gardens, green facades and roofs ensure that heat can disappear faster. The Municipality of Amsterdam tries to subsidize this. Green roofs make sure that the city becomes less hot, but also ensure less energy usage of the buildings on which they are placed. The roof isolates well so the air-conditioning doesn’t need to run as often in summer, and during winter the heater doesn’t have to run as high as it is currently.

The Municipality of Amsterdam offers different options to promote greenery in the city. In February a new subsidy will be presented to stimulate the construction of green roofs and facades, as they turn out to offer a lot of possibilities. On the green roofs there’ is also place to create vegetable gardens, like for instance on the Zuidpark. It is also possible to request for a tiny garden in front of your house. A few paving stones will be removed in front of the house, than soil will be deposited and an edge will be constructed. It is possible to make a request to the Municipality until the 29th of February to decorate your own garden. If you don’t have the possibility to create a tiny garden in front of your house or on a balcony, than there is the possibility to adopt a piece of the city.