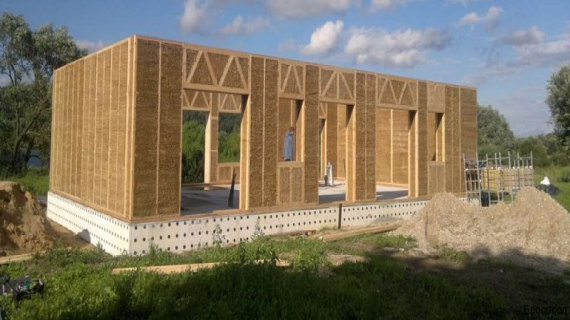 The living concept has been developed with environmentally friendly materials like straw.

The Dutch company Strotec has developed aliving concept with environmentally friendly materials like straw. Houses canbe delivered fast and inexpensive by prefabricating the parts. Strotecuses the so-called Ecococon-concept of the eponymous company from Lithuania.This concept has been further developed and applied to the Columbus ResidenceStrotec, where a combination of straw and clay are incorporated in theprefabricated walls. Residents can benefit from a healthy indoor climate,because these vapor-open facades create an optimum moisture and CO2 regulation.

Energy-neutral The Columbus House has a higher isolation than a traditional house, according to the construction company. Therefore the biobased house has a lower energy requirement. The house can be delivered energy-neutral by providing the Columbus House with solar panels, a heat pump and a heater that is heated with wooden pallets. Besides this there is no need for a gas connection and generates as much electricity as is used during the year.

Building with straw
A remaining question is will the construction sector pick up this sustainable living concept. "There is a lot of demand, but nothing really happened yet," says Jan Walrecht, partner at Strotec, to Cobouw. "The building industry is traditional in this regard. Unknown makes unloved. However, it is a matter of time, with more stringent CO2 regulations, the market will come by itself, and building with straw will be a necessity ". The prefabricated straw panels of Ecococon are certified in Lithuania according to the standards of the Passive House.

See below how the concept of Ecococon works:

This is very cool