How do you want to shape the Digital City of tomorrow? Recap: de Digitale Stad | Pakhuis de Zwijger 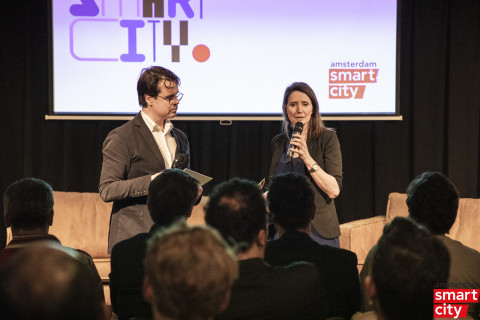 Last Thursday Amsterdam Smart City organized an open dialogue between its partners and Amsterdammers in Pakhuis de Zwijger. On the agenda: the Digital City. Because everyone deserves a seat at the table when it comes to shaping the digital city of tomorrow.

Leonie van den Beuken, the Program Director of Amsterdam Smart City, opens the night: ‘The changes necessary for the city and region to move forward, can only be achieved through collaboration. When it comes to driving innovations, we all depend on each other.’. With this night Amsterdam Smart City facilitates the conversation on the digital city between their partners (the City of Amsterdam, Nemo Kennislink, Tada) and interested citizens.

Personal freedom, inclusivity and creativity are the three main themes the City of Amsterdam focusses on in their ‘Digital City Agenda’. Responsible use of data is part of this. How do we gain control and ownership over our personal data in this transition to a Digital City? The City included the ‘Tada – data disclosed’ manifesto in the Agenda. Tada provides six principles to consider in the digital city: inclusive, control, tailored to the people, legitimate and monitored, open and transparent & from everyone, to everyone. ‘How far is the City in implementing these principles in its own organization?’ asks someone in the room. Practice what you preach: the City wants to set the right example by being the first municipality who puts the Tada manifesto into practice. Currently the City grades itself a 6/10 when it comes to implementing the manifesto. Still a long road ahead. Therefore Bart van de Sande (Innovation Officer, City of Amsterdam) invites everyone to send in their ideas on how to shape the Digital City. 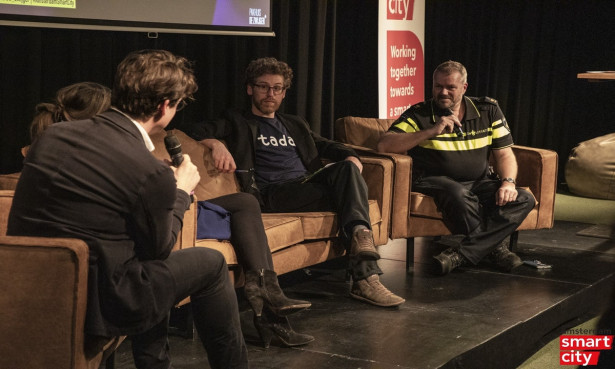 Douwe Schmidt (Boardmember,Tada) tries to activate citizens into the Digital City conversation: ‘Even though you don’t understand anything about technology or data, you are still entitled to decide on what happens to your personal data. You are entitled to have a say in this conversation.’. Nemo Kennislink is doing research on how to get citizens involved in the Digital City in collaboration with Amsterdam Smart City, VU University and AMS Institute. Research project is named Onderzoeksproject Catalyst, you can find more on this on our platform. Giovanni Stijnen (Senior Program Manager, Nemo) explains the research in three steps: i) activating citizens: using gamification or art to make the subject understandable; ii) verbalizing citizens: help people to articulate their vision on the Digital City; iii) connect & reflect: opening up the dialogue between citizens, policy makers and scientists – to get citizens involved in shaping their Digital City. Currently, they are in phase three of the project. Giovanni makes an appeal to the scientists and policy makers in the room: ‘*Do you want to participate in the dialogue with citizens? Contact me.*’ 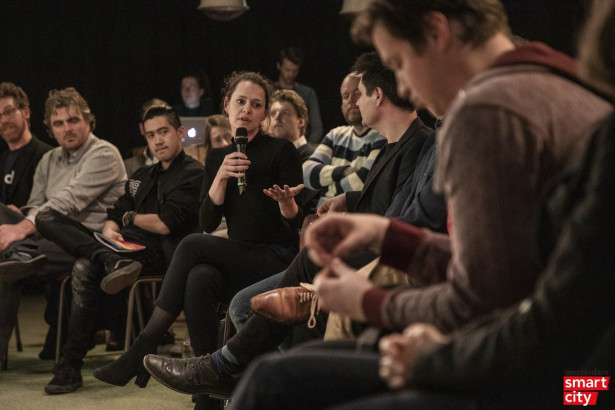 But why do we even want to transition to a more digitalized city? Daan Groenink (Innovation Officer, City of Amsterdam) and Marc Wiebes (Innovation manager, National Police) talk about the safety benefits of technology and data. Daan refers to the Digital Perimeter project (an Amsterdam Smart City project) in the Johan Cruijff ArenA area: ‘*Back in the day, we needed actual fences to regulate large numbers of people in a certain area. Nowadays, we can use smart sensors and smart cameras to assure safety. On the one side we can offer better services and experiences to the visitor, because the area is openly available. On the other side we can offer more safety in the area by using these technologies.’. Marc mentions an example of the City of Eindhoven: ‘The sensors send an automatic warning to the local police when they detect an unfriendly or aggressive tone. The police can respond directly to this warning. This decreases safety hazards.*’ The Digital Perimeter in the ArenA area will be a learning by doing project. That’s why the project needs your help: ‘How can we communicate to visitors that we are using smart technologies to guarantee safety? And how can we explain that we do not store and use personal data captured by the sensors and cameras?’ Post your best idea in the comments!

Thank you for a nice recap!
For more information on the cities plans, read our recap of the presentation of the cities digital agenda here: https://tada.city/en/nieuws/tada-principles-included-in-the-agenda-for-the-digital-city/