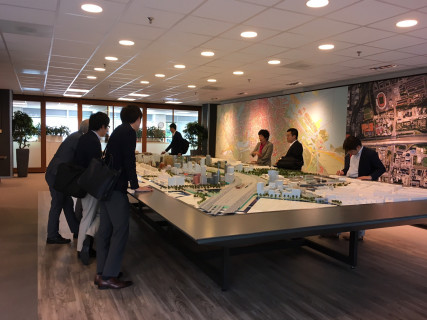 Amsterdam Smart City (ASC) is receiving an increasing number of requests from international delegations interested in learning from Amsterdam’s leadership as a smart city.

In response to this demand, ASC has developed a Delegations Program to welcome visiting delegations interested in exchanging experiences and meeting local innovators. During January - August timeframe, we hosted 44 delegations consisting of 357 delegates from 15 different countries.

A recent visit was by a delegation of civil servants from Leverkusen, Germany. The delegation consisted of key staff members from the mobility and planning departments as well as city council representatives interested in cycling planning and smart mobility. Walther Ploos van Amstel introduced Amsterdam’s approach to electrifying transport and innovations in the logistics sector. The group was also lead on a bicycle tour illustrating spatial and traffic planning elements which support high rates of cycling.

In August ASC hosted a group of Taiwanese students and young entrepreneurs on a two-day program focused on the circular economy. The group got a broad perspective on circular developments during expert presentations from Circle Economy and learned about community driven projects from Tapp. The group also met a number of social entrepreneurs while visiting Makerversity, Plantage Lab, B. Amsterdam and Impact Hub.

ASC also cohosts delegations in collaboration with partners such as AMS Institute. In June we organized an innovation roundtable for a high level Australia trade mission including the Minister of Finance and Ambassador to the Netherlands. ASC partners illustrated case studies and best practices across different sectors. These included innovative energy pilots under the City-zen program, the recently launched City Dataportal and Arcadis’ perspective on smart urbanism.

With Amsterdam being the winner of the 2016 European Capital of Innovation (iCapital), Innovation Norway was interested in learning from Amsterdam’s approach to fostering innovation with a focus on digital connectivity, energy and startups. Representatives from the public and private sectors met with a number of innovative startups, including 30MHz, specializing in IoT solutions and Quby, the creator of Toon smart thermostat. The group also visited TQ – Amsterdam’s largest tech hub, where they met with DutchBasecamp to discuss the role of “landing pads” for startups scaling internationally.

Officials from Seoul look for ways to engage citizens

In June we hosted a South Korean delegation consisting of governmental officials and technology firms interested in citizen engagement and community driven projects. Digital Connectivity Adviser Carlien Roodink provided a broad perspective on the city’s approach to digital innovation and connectivity developments in Amsterdam. The group also met with Paul Manwaring of Glimworm who shared his approach to working with communities to build meaningful projects that have a positive impact on people’s lives, with the IoT Living Lab as one example.

Why are international delegations important to Amsterdam Smart City?

The Amsterdam Smart City Delegations Programs provide opportunities to exchange knowledge and can lead to new collaborations. We are also proud to hear that Amsterdam’s culture of collaboration and innovation serves as inspiration to other cities. As one delegate recently put it: “ what seems to be different about Amsterdam is that it doesn’t just talk about innovation, but it actually does it!”

Or are you representing an international delegation interested in Amsterdam Smart City? To request a visit fill out this form. You can also engage with the Amsterdam Smart City innovators directly by creating an account and posting your request on the platform!