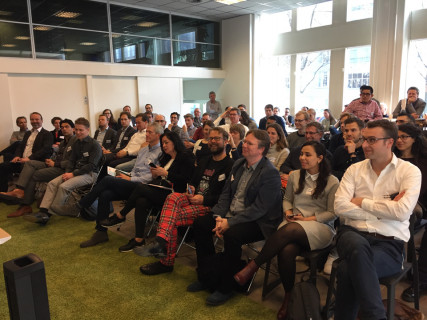 The digital revolution allows organizations to gather information and to do something tangible with that data in the city. How can organizations use this data? And should citizens be incorporated in this process of data gathering? Those were the central questions at the Smart Data, Smart City – Citizens & Data event, organized by Amsterdam Smart City and Datalab on 23 March. Different keynotes elaborated on these questions and had a mutual agreement on that citizens should be incorporated. However the angle of approach was different.

What if you could recruit thousands of citizens to gather data with devices they already own? René Post, head of program citizen science, elaborated on Waag’s project to use digital devices to measure gamma radiation. In case of a nuclear meltdown thousands of citizens are able to measure radiation levels in their neighbourhoods. By increasing the scale of measurement the prediction becomes more accurate. Simply by blackening a camera lens with a piece of duct tape, special software can calculate the degree of radiation. This approach perfectly resonates with Waag’s motto ‘If you cannot open it, you don’t own it’. Beside using citizens to measure data, you could also use the data citizens create.

Using citizen’s data is exactly what Daniël van Motman*, expert advisor traffic management at City of Amsterdam* does. He gave some insights in how the City of Amsterdam used data to manage the crowd at SAIL 2015. By combining smart cameras, Wi-Fi sensors, GPS devices and social media data, software is able to visualize and predict crowd flows. The smart cameras used in this project can distinguish pedestrians from cyclists and count how many pedestrians there are. Also these cameras can recognize to what direction the pedestrians are heading. That output can be used to increase public safety and to provide the public with alternative routes. The idea from the audience to make that anonymized data available for public use in the future , gave Daniel some inspiration; this might be done in the future. Besides data on crowd flows and the number of people at the venues is it important to estimate the public’s mood. That is why social media data are an important parameters.

After the keynote speakers there was room for some pitches. Members of the Amsterdam Smart City community could sign-in to pitch their project. Joost Brinkman was the first to sign-in to pitch.

The motto of this project Toogther would probably be:
“You don’t need to be a CEO to have your own driver.” The project is aimed at Amsterdam’s business district ‘Zuidas.’ Toogethr is a platform where co-workers can share a ride based on a set of variables. Questions such as ‘Will this app change travel behaviour?’ And ‘What will be the impact of self-driving cars?’ were answered very easily: ‘Carpooling is the first version of the self-driving car!’

> ##### 'A very dynamic community with interesting projects: from blockchain to intelligent sensors; from start-ups to innovation labs; from open-data platforms to health tech innovation. I am looking forward to joining your future meetings.'

ALab’s Blockchain Lab for the Public Good offers a workspace and a place for inspiration for creatives and innovators. Since ALab stands for its motto that the Blockchain should be open for everyone, Musicians, content creators and other creative industry people can safely transfer content without an intermediary. This allows creatives more freedom and more security for their business models. ALab is looking for more initiatives to implement blockchain solutions.

Manon Eekelder, brand new curator on amsterdamsmartcity.com, is working on the health of the city. How healthy is the city really? Manon emphasizes a smart city is more than technology, it is also about fair and sustainable food, citizen’s health in general and the amount of greenery in a city. The 6th of April De Gezonde Stad will organize an event on this theme, different workshops, pitches and experiences will give you new insights. Get your hands dirty and sign-in!

Another initiative in the field of healthy city but with a different approach is: Maak je stad! The European Commission awarded Amsterdam as iCapital 2016, the most innovative city in Europe. 600.000 Euro prize capital is used to support ongoing initiatives in the field of talent and health. If you are involved in such an initiative you can apply for €5000,- to €20.000,-. The deadline to apply is April 14th.

> ##### 'A very nice event! Great to see so many people working on the future of the city! We got a lot of nice reactions to our project and I managed to get some nice new connections!'

In short, a lot of different approaches to incorporate citizens in the smart city. We felt the ambitious vibe in the audience to co-create a future proof city. It was clear that not only advanced technology projects, like the monitoring of the crowd, use data to benefit citizens’ needs but also small low-tech bottom-up initiatives. Want to meet our community as well and discuss smart city solutions? Join our next collaborate session with DataLab April 13th on Data for Mobility.

Likewise, thanks for the active people who made things happen and thanks for the keynote speakers sharing their ideas and also would love to know, how can we further develop the ideas? How can we courage others to give feedback? I consider feedback as the key learning factor - cu

Thanks for the great event. Looking forward to see more and meet the great community members soon again.