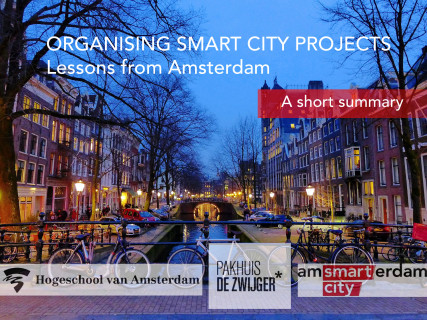 On the 19th of December, the third edition of the Smart Citizens Talk took place in Pakhuis De Zwijger. During this event, lessons learned from smart city projects in Amsterdam were discussed. Read a short summary here.

​Do you live in a smart city?

Frank Kresin (Research Director at Waag Society) gave an introduction on the definitions of a smart city and a smart citizen. He started with a question to the audience: do you live in a Smart City? This was an interesting question but hard to answer for the majority of the crowd. Is a city smart when it is efficient? Or when it has ‘smart citizens’? His conclusion was that the definition of a smart city depends on your own perspective and vision.

​'Technology is not the problem'

After this introduction, Willem van Winden (Professor Urban Economy at Amsterdam University of Applied Sciences) showed the results of a research of the Amsterdam University of Applied Sciences about the lessons learned from smart city projects in Amsterdam. They analysed 12 smart city projects in the city of Amsterdam and evaluated them with several categories. Click here to read the report. His main conclusion was: ‘Technology itself is not the problem, but the success depends on many other factors, for instance the way users are involved in the technology, transparency during the development/project, privacy and upscaling opportunities in a city/country.

​After this, three interesting speakers shared their experiences and view on their smart city project (Bas Boorsma from Cisco, Francesca Miazzo from CITIES, Michiel Gerritsen from WeGo and Cor Gerritsen from Mokum Maritiem).

Bas Boorsma, Director Internet of Everything at Cisco (North Europe), was one of the speakers at the panel discussion. One of his messages was: 'As a company, do not wait for the right start-up, but start up your own start-up'.

Fransesca Miazzo is co-founder of the CITIES Foundation and is doing a project in Amsterdam Noord with plastic waste collection. An interesting quote of her side: ‘Related to Inclusiveness: Provide a platform were people can benefit from a change and to go from niche to mainstream.'

Michiel Gerritsen discussed their technology to make more efficiently use of cars in Amsterdam. Did you know that 90% of the cars in Amsterdam are standing still? If these cars can smartly ‘communicate’ with each other, this percentage could go down.

At the end, some speakers shared their take-home-message:

> ‘Learn from worst practices instead of best practices’ – Cor Gerritsen and Inge Oskam
>
> ‘Is your problem a shared problem? Don’t make a business out of it, but change the system’ – Fransesca Miazzo
>
> ‘Use your heart in developing smart projects, use your rational only for your business model’ – Bas Boorsma

Other interesting quotes/take-home-messages of the event are: